Skip to content
Home\Family, Travel\Camping with Kids: Ziplining with a Slackline – HUGE HIT!

Camping with Kids: Ziplining with a Slackline – HUGE HIT!

Going camping with little children is a lot more work and stress than before becoming a parent. Not only do I have to pack for myself and the wife, but also for the kids and their specific comfort needs like extra clothes, some toys, kid-friendly/baby food, and so on. Then there also is the matter of having to watch out for their safety while preparing meals or setting up camp, dressing and getting them ready for bed, and playing Tetris with all the gear that somehow must be packed back into the car. Welcome to parenting while camping!

I love taking my children on trips, I really do. Some GREAT memories had been made like when I took my son on his first backcountry adventure (wilderness backpacking) as shown in the below video:

Despite my children driving me nuts on trips at times, I would do it all over again… for them.

Despite my children driving me nuts on trips at times, I would do it all over again… for them. Why? Because they told me how much FUN they had! Little did they remember or realize how much work went into putting everything together — how much patience I had to exercise to keep my cool when they seemingly pushed every button left in my body and soul. Yet, seeing their smiles or them recounting their fond memories makes all that stress disappear and worthwhile.

So, what was next? Ziplining. 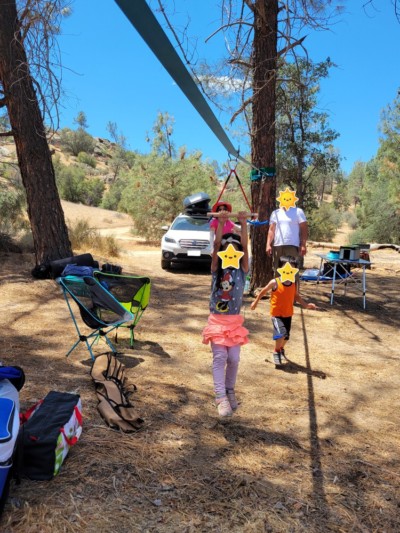 A couple weeks ago, I came across the Yamiprobi Ninja Slider Slackline Pulley that was sold as an obstacle course or zipline accessory for children and adults. That immediately gave me ideas for what we could try for our then-upcoming trip near Kernville, CA, over the July 4, 2021 weekend! We would be having six children camping during the hot, California summer days with temperatures forecasted between 100F – 104F. Ziplining was something I thought would keep them self-occupied enough while the adults went about their parental duties to set up, cook, and clean around the camp site. Anything that would alleviate our burden during that heat would be welcome!

I purchased the following items for the zipline:

I also brought these for comfort:

The Trailblaze was a recommended brand for slacklining, the “act of walking, running or balancing along a suspended length of flat webbing that is tensioned between two anchors” (Wikipedia). My intent was to use it for either its intended purpose by adults, or to turn it into a kids zipline with the accessories found with the Hokinety. Alternatively, we could set up both products for simultaneous use by adults and children.

The slackline that came with the Trailblaze was rated for persons up to 300+ lbs combined, according to the product description, and the Hokinety supposedly was for 30 kN (kilo-Newtons) or 6,700 lbs of force. The latter’s accessories were listed for use with weights up to 380 lbs, both lines were 3mm in width, and the Yamiprobi Slider Pulley was made for 3mm slacklines.

We set up the Trailblaze line with Hokinety’s monkey bar and plastic swing, each attached to a Yamiprobi slider pulley. We wanted to give the kids options to choose from as some preferred the swing over the monkey bar and vice versa.

The Campros screen tent was added to provide some shade and to allow the children to zip right through for an additional level of excitement. Multiple light bulbs were later set up for the evening so the fun could continue in the evening. 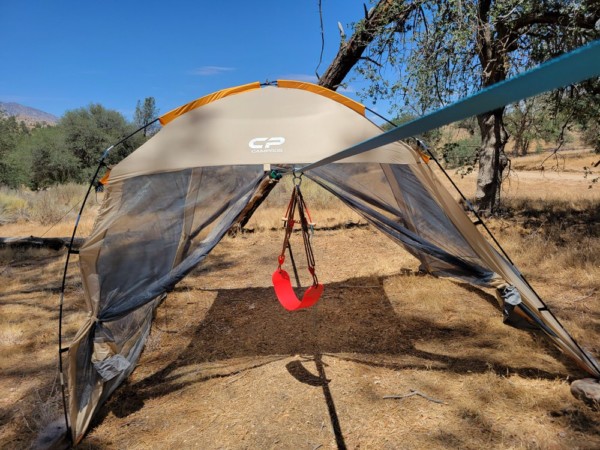 Ziplining through a Mesh Screen Tent

The slackline was wrapped around two trees (with tree protectors) at 7′ and 4-5′ height, respectively, for a more controlled, slow descent. We did not want the little ones to zip down too fast and risk injury. I noted from a slackline setup video (see below) that the line should be folded where it meets the protectors to have a more secure configuration. Ensured the ratchet was securely locked and in the correct, downward-facing, resting orientation.

How to set up a slackline (for beginners) /HopOn Slacklines

Once the slackline was set up, we performed final safety checks to ensure it was secure and not damaged, including testing the tension by having a 190-pound body mount the line. Then we added the slider pulleys, swing, and monkey bar and went for a test run with an adult to check descent rate and ground clearance. We found the plastic swing’s rope having been too long and used 12 kN-rated carabiners (or up to 2,697 lbs of force) to shorten it.

The result? I will let the video of my son’s excitement do the talking:

To make the zipline more enjoyable and safe, we instructed the children to put their feet down onto the ground as they got closer to the end. They would not be violently yanked off the swing that way when the pulley met the ratchet. In addition, I would attach a solid foam or rubber padding just before the ratchet so the repeated collisions by the slider pulley would not cause damage over time.

Always keep safety in mind: Whatever you set up, ask yourself if anything could potentially cause harm. For instance, we attached a piece of rope to the triangle monkey bar so the kids could pull it back to the starting line. One of my friends then turned it into a loop, but I immediately told him that it could be a strangling hazard, and he agreed.

Ziplining by an Adult and by Kids at night (July 2021)

Safety first! Whatever you set up, ask yourself if anything could potentially cause harm.

The camping trip was a SUCCESS for the children despite the dry 100F – 104F daytime heat. They could not stop talking about how much fun they had ziplining, playing in the nearby Kern river, eating cold watermelon, and watching the Independence Day fireworks under the starry (but still very warm) night. My friends later told me that the zipline was a good call — we would have struggled more without it as the heat just made everything miserable for us to try to keep the kids comfortable.

A slackline/zipline was very simple to set up that provided hours of entertainment for the children. It has now become an essential part of my camping gear. 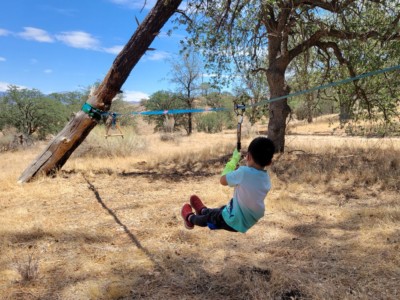 Ziplining with a Slackline 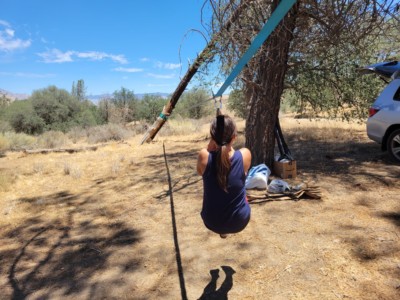