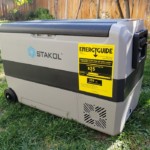 Search For A Dual-Temperature Car Freezer

It has been nearly a year since I purchased my first car freezer, and since then I had reviewed and compared six of them from friends, coworkers, and family. Each one had positives and negatives, and even though the Foho BCD-32 (34qt) and BCD-52 (55qt) were my favorites, none were perfect. Perhaps more interesting was that they all (including those by Smittybilt, Whynter, and Costway) were manufactured by Alpicool who also sell car freezers under their own brand. Yet, the Fohos were the more silent ones and felt solid enough to withstand a nuclear explosion. 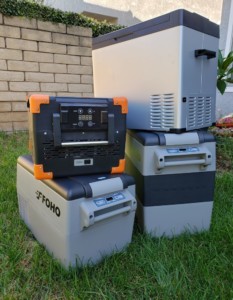 My best friend and I came up with the idea to bring ice cream to surprise our kids with when it was safe to go camping again. But, we did not want to bring two, separate appliances and possibly end up with an extra one sitting unused in the car once its frozen content was consumed. Powering two would also require an additional battery power station.

I set out to find an affordable car freezer with two, truly distinct cooling spaces that hopefully also had:

It was surprisingly not easy, but I eventually found and liked the feature set of the Costway 53qt/50L Car Freezer (EP24413/24413-CYPE). How was it? Almost perfect… almost.

The Costway 53qt Car Freezer looked like a rebranded, less expensive Alpicool T50, and like others manufactured by Alpicool, its controls, settings, and performance would be similar to the appliances I had previously reviewed. It did strike me with surprise that “Stakol“, not “Costway”, was the brand showing on the side of this freezer even though the manual referenced both companies. Perhaps equally unexpected was the welcome presence of a yellow EnergyGuide label that I rarely had seen with past products in their class. 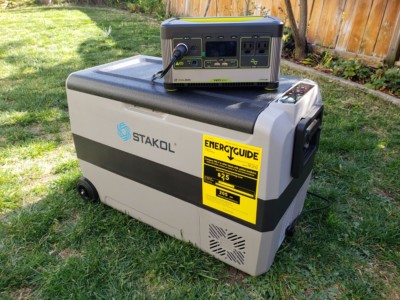 I very much liked the aesthetics of this one over my favorites, the Foho BCD-32 and BCD-52, with its clean lines and tough-looking exterior. The chest-style lid firmly stayed shut and required both hands to open on a light fridge, but was not a problem with heavier loads. The wheels helped move the appliance around with ease, and both handles on each side were extendable and stowed away magnetically. The compressor is rated for rough roads up to 30 degrees steep for short periods at a time.

The inside comprised of two storage compartments, each with a removable wire rack and separated by an unattached, plastic divider in the middle. Cleanup was simple through the addition of a drain hole, and the wire racks allowed for content to be quickly taken in and out. Unlike past appliances I had reviewed, this Costway was able to independently control each section’s temperature, and tests over multiple 48 hour periods confirmed that they were pleasantly accurate: the freezer kept ice frozen at around -4F, and the fridge kept a juice pouch cold at 38F. Reliable thermometers matched the chambers’ settings within expected fluctuations. Remove the center divider, and the entire appliance converted itself into a single, large zone with just one temperature configuration. This opened the possibility to store an entire rack of ribs for a delicious overlanding trip!

Like other car freezers made by Alpicool, it quickly cooled from 74F to 32F within 30 minutes, used between 24W-50W of power, and dropped to -1F within the next half hour. Once the set coldness was reached, the single compressor would shut off until it was time to start up again, conserving energy and providing silence. Set temperatures were stored in memory so you would not have to annoyingly configure them again after an unexpected power loss. Between the two compartments, the larger one farthest away from the touch control display could not be set cooler than the smaller one, and so in dual temperature use, the more compact chamber would act as the freezer.

Tip: A car freezer’s performance and energy consumption depend on the ambient temperature. The cooler the surrounding is, the faster the appliance can chill and the less power is used.

Advanced programming options were available from the physical control panel, and an Alpicool-made smartphone app that also allowed for Bluetooth-based remote control up to 30′ away. It always was nice to be able to check on the appliance’s status from the driver’s seat without having to go dig through the car’s cargo.

As much as I liked this Costway freezer, my biggest gripe was the noise level of the compressor. It was not as quiet as both Fohos, and was as loud as the Domende, Euhomy, Linsion, and Rockpals car freezers I had evaluated. Was it unbearably noisy? No, I had actually gotten used to it, and there are multiple ways to curtail the sound volume. I was also disappointed to find the 15A fuse hidden within the space shared with the compressor instead of being on the outside as the Foho, requiring the removal of multiple screws to get to it.

Between the silent Foho BCD-52 and the slightly louder Costway 24413-CYPE, I could not decide on a favorite for a couple of days, but ultimately, I passed the torch over to the Costway for its dual-temperature controls, back-saving wheels, and versatile storage configurations for nearly the same price. We have a new king in the house!

Removal of center divider turns two, separate compartments with independent temperature controls into a large one with one coldness setting.

Tip: The colder the ambient/surrounding temperature is, the less often the compressor will turn on to cool/maintain the inside. An insulated, protective cover (like the one made for the Alpicool T50 that works with this Costway) should be considered to help maintain internal temperatures better. 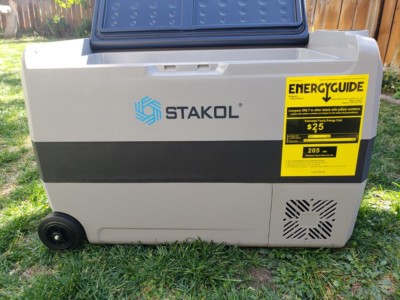 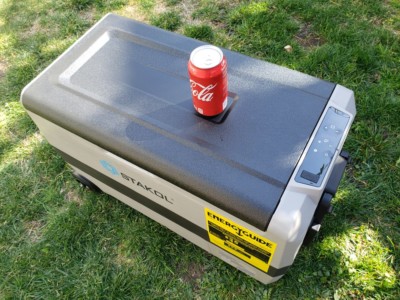 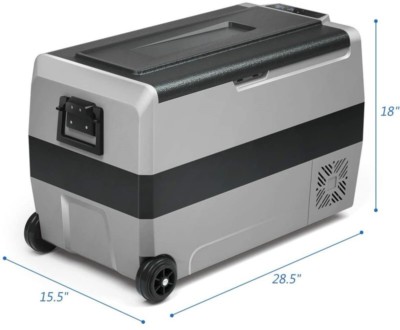 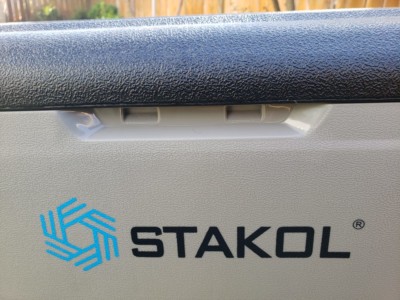 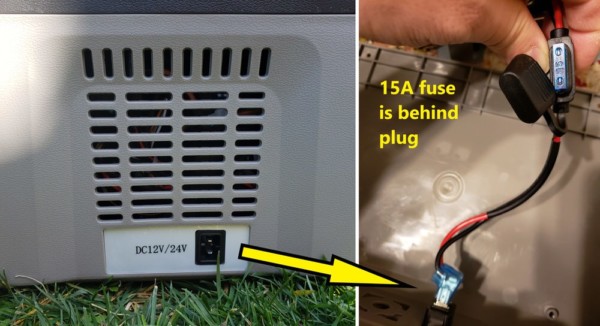 To set: When powered on, briefly press Settings button to cycle between Max (Default), Eco.

To set: When powered on, hold Settings for 3 seconds. Cycle between High (Default), Medium, Low with Settings button. 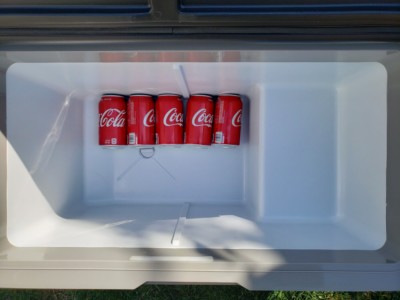 If you plan on taking the appliance with you on a trip, there are multiple ways to power it. Ensure the source can provide at least 60 watts. Some options: 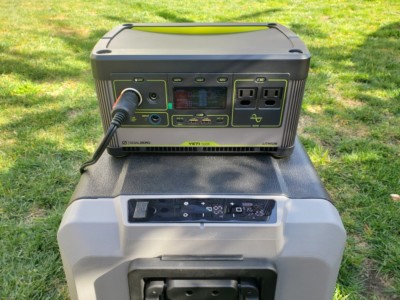 I plug the car freezer into a battery power station while driving. This allows it to continue operating while the vehicle is off. The battery itself is energized via a 12V car charger or solar panels:

To enter programming mode: Turn unit off but keep plugged in to a power source. Hold “Settings” button for 6 seconds until “E1” displays. Cycle through options with “Settings”, change values with “+” or “-“. Accept setting by leaving the screen blinking until it stops a few seconds later. The various configurations can also be changed with the Bluetooth-connected app (which also is the easiest method).

PROGRAM AT YOUR OWN RISK! Improper use may void warranty and/or cause freezer to fail or be damaged. 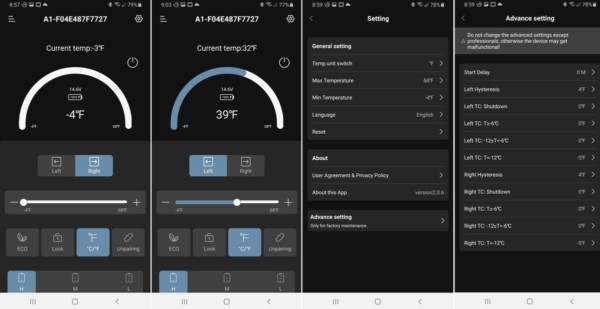 The displayed temperature should be roughly the same (by about 5.4F by default) as the actual one inside because the compressor will ONLY stop cooling when the display (not the storage’s true temp) matches the set degrees.

If you find the temperature displayed on the control panel is different than what is actually inside, the discrepancy can result in content overcooling or being too warm.

To correct the discrepancy between the set/displayed temperature and what the internal storage really is, place two, reliable thermometers inside and perform tests with temps set to 0C, -9C, and -20C (one for each of the E6-E8 TC ranges). I found the calibration easier to start with the warmer values first. If, for example, the display is 8C, 4C, and 1C higher (for each range) than what is inside, set the temperature compensations to: E6 = -8C, E7 = -4C, and E8 = -1C.

If you find yourself having screwed up the E1-E9 settings, you can reset them to factory defaults.

The car freezer only uses power to reach or maintain the set temperature. Once there, it goes idle to minimize power draw. As such, the appliance could last a lot longer than the times listed above. Ambient temperature (how hot it is around the unit) greatly impacts how often and for how long the freezer’s compressor kicks in. The colder it is outside, the less power is used.

If an error occurs, one of the following codes will display on the LCD:

Bonus: Defrosting and How Refrigerators Work

I was fortunate (or unfortunate) to troubleshoot our home refrigerator a few years ago when it could not keep food frozen nor items cool in the fridge section, resulting in nearly a thousand dollars in lost food and medication… twice. SEARS technicians were useless and considered the unit a total loss. After having spent months researching and learning, I gained an understanding of how refrigerators work and fixed it myself. (If you are curious, 2 thermistors needed to be replaced at a couponed cost of $86.)

This car freezer (like most, if not all, in its class) does NOT have an auto-defrost cycle, and so requires occasional, manual defrosting when used for an extended period of time.

After having worked with a total of seven car freezers during nearly one full year, I had been disappointed that none checked every box on my list. The dual-temperature ones were too expensive and also could not be converted into a larger, single zone. All of the larger ones were too heavy, lacked wheels for easier transport, and nearly none had a drain hole for simple cleanup. Most also did not include any wire racks, and some could not be controlled with a smartphone.

The Foho BCD-32 and BCD-52 were my overall favorites among the first six despite lacking many of the above-listed features, but then the Costway 53qt “Stakol” (EP24413) came about, and I was very excited! It had independently controllable temperatures for two compartments that could easily convert into a single, larger one, came with wire racks, had wheels and a drain hole, looked solidly built, and could be monitored and controlled through a Bluetooth-based, smartphone app. An insulated, protective cover should be considered to help maintain internal temperatures better. Pricing was good, energy usage was low, and best of all, the cooling temperatures were accurate for both zones right out of the box. In addition, it could be powered by AC, 12V DC car chargers, and solar panels with battery power stations (like the Goal Zero Yeti 1500x and Jackery Explorer 1000). Sounded like a perfect fridge, right? Almost.

The Costway 53qt car freezer was not perfect. The lid could be difficult to open one-handed, and it was not as quiet as the Foho units (though it was on par with most of the other appliances I had worked with). Ultimately, the versatility and extra features of the Costway made it my new, favorite car freezer.

I very much look forward to the next overlanding/boondocking trip with friends and family where the kids could be surprised with cones of ice cream in the summer — in the middle of nowhere. Coolest dad ever. I know.