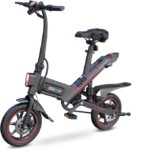 Biking is a form of exercise and adding an electric motor gives me some mixed feelings. On the other hand, assisted pedaling or fully motorized transportation is a great way to explore difficult or far-reaching areas normally inaccessible to the casual bicyclist. Rides with friends used to be a regular weekend activity before having kids where I purposely chose to be on a mountain bike going around 10 mph. This was to slow myself down for the relaxed riders in the group.

Costco started selling Jetson Bolt Pro folding, electric bikes last month that many, MANY of my friends had purchased and had been raving about. Should I get one for my wife? Could I save some gas and use it as my daily commute to and from work? After consulting with my wife, she agreed to have us purchase one not for herself, but actually for her mother so she could ride with the family. And so we did.

I first looked at the Jetson Bolt Pro and did not like its max range of 17 miles, weak, 250W motor, and maximum speed of 15.5 mph. It would have worked fine for my mother-in-law, but I also wanted it to be capable of taking me to/from work on days I wanted to add some exercise to the commute. After researching the web for nearly a week and looking at the Segway and other brands, the Gyroor C2 electric bike caught my attention for its very unique design, but it was no longer available for sale. What did catch my wife’s attention was the Gyroor C3 because it was very similar in look to her Novara/Dahon Folding Bike (non-motorized) I had bought her over a decade ago.

The Gyroor C3 electric bike is fun to ride! With fairly fast acceleration and power, comfortable seat, and a sporty, racer-like look, maneuvering it with the wind brushing against my helmet-protected face felt good and freeing! I’m used to biking at around 10-12 mph on a Santa Cruz mountain bike, and effortlessly zipping along faster than that with motor assistance is a far different feel. The highest speed I was able to clock on a flat surface was about 18 mph as per my Garmin GPS and a speed tracking smartphone app.

The disc brakes initially squealed until they were broken in, and the acceleration control on the right-side handle bar is second-nature that provides a good boost. The bike automatically kicks in some assistive power as you pedal, and the ability to fold the bike for fitting it inside a trunk of a sedan or hatch back makes it portable, though it is far heavier (at 48 lbs) than a non-motorized bike. 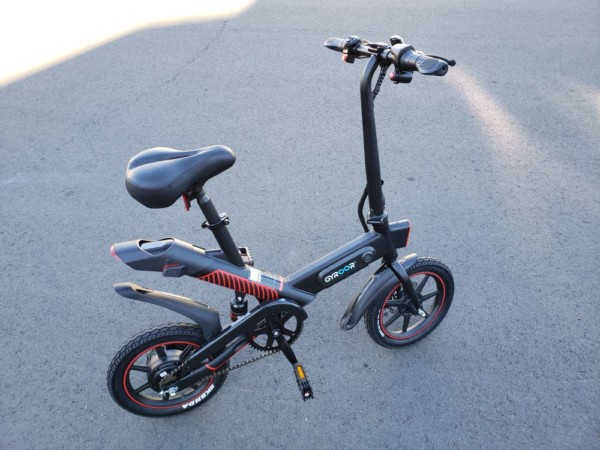 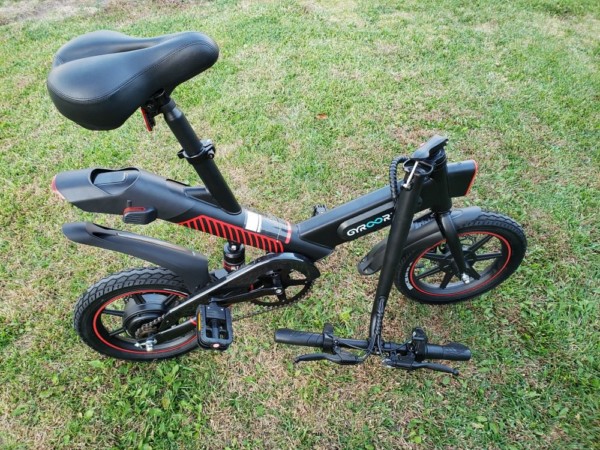 It packs a nice punch of power with its 450W (nominal) motor going up hills, and is priced more competitively against well-established brands, such as Segway and Razor, for models with similar specifications. The IPX54 water rating allows the bike to be used in an environment where water spray can come from any direction. In other words, it is okay to ride in the rain, though caution should be exercised.

I was able to ride the bike over a two-day period for roughly 29 miles with the battery run down to 25% remaining. Regarding regulations governing motorized bicycles, they are much more permissive in California than for electric scooters.

The biggest gripes I have are that 1) the seat post is a bit limiting and may not be tall enough for someone over 6′ in height, and 2) there is no speed display on the LCD. The screen only shows the battery level.

According to their website, the Shenzhen, China-based company was founded in 2012, had been focusing on hoverboard technology, and has an office and warehouse in the USA. It started branching out into increasingly-popular, electronic bikes and scooters. 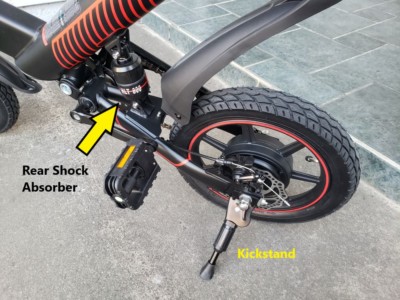 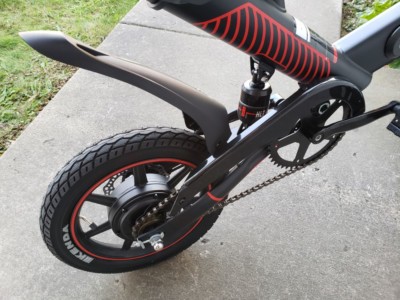 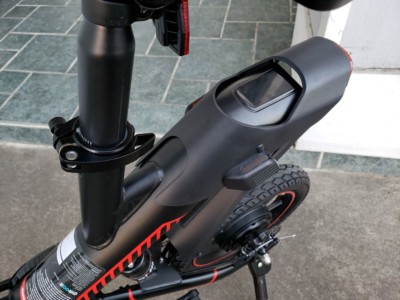 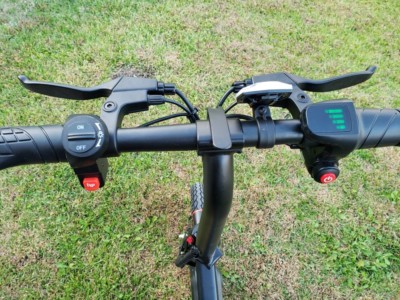 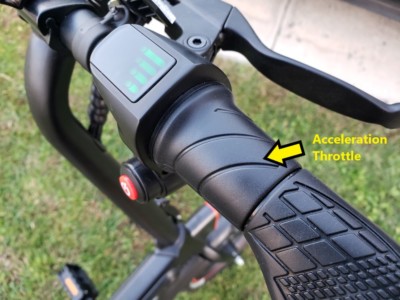 Dampening rear shocks for a much smoother, comfortable ride. 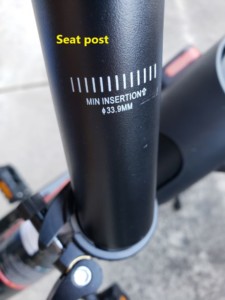 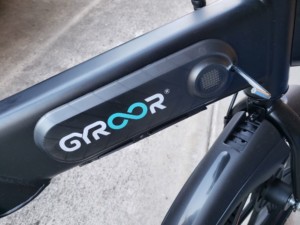 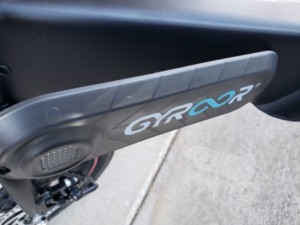 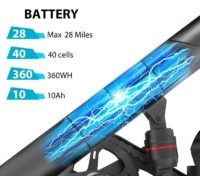 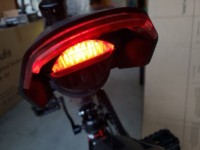 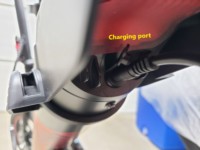 I use a repair stand to help with assembly and maintenance. SereneLife SLBKRS3 has a maximum load capacity of 66.7 lbs — enough to carry most electric bikes without falling over. 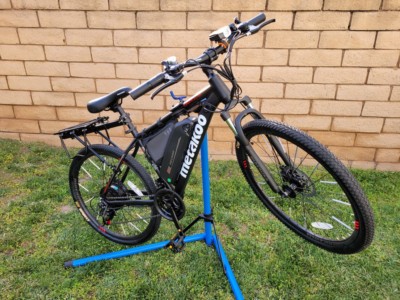 For easier maintenance or assembly, a bike repair stand can save a lot of time and back pain. Be sure to get one that can hold up your bicycle’s weight.

When the bike is powered on, the LCD displays the battery level. Each bar is 25% charge remaining.

You can lock the bike to a permanent structure through the triangle portion underneath the seat where the rear shock is at. For good measure, you should also lock both 14″ wheels. 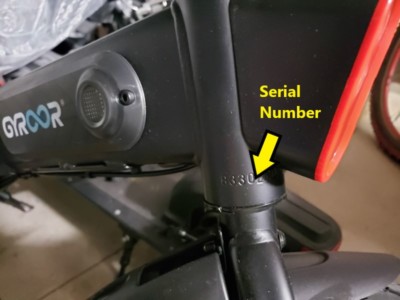 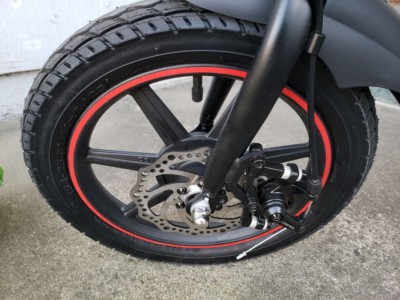 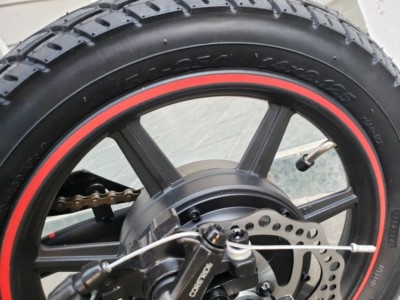 Most, if not all, airlines prohibit electronic scooters and bikes that do not meet specific criteria. United Airlines, for example, allows collapsible ones whose battery is both removable and below 300 Wh. Southwest Airlines is more restrictive at 160 Wh. This bike’s battery is 360 Wh. Lithium-ion batteries are known to be volatile, and the higher their capacity, the more risky they are. Check with the airlines, TSA, and FAA for more details.

I first learned about laws governing motorized scooters when reviewing the Joyor X5S, and unfortunately, they were (and still are) not straight-forward. There had been a number of accidents involving scooters hitting pedestrians or riders hurting themselves. I get it. Laws are there to protect people from each other and themselves, especially from irresponsible individuals.

Electric bikes can result in severe injuries or death with their high speeds.

Surprisingly, the laws governing electric BIKES are much more lax. They are very similar to non-motorized bikes, in fact! There are different classes of eBikes. This Gyroor falls under the lower-speed Class 2 with a maximum of up to 20 mph, and as such, can be used on Class 1 bike paths in California. All 3 classes can ride on the protected, one-way Class 2 bike lanes found on streets and highways. Be sure to check with your local regulations. Some States categorize eBikes as mopeds or motor vehicles.

Disclaimer: I AM NOT A LAWYER. Please consult your local city, police department, and/or legal professional for advice.

The following is my interpretation of how I understand the law. It has been shortened to only point out parts that I found interesting or noteworthy.

Some accessories I recommend for this bike for added convenience and safety: 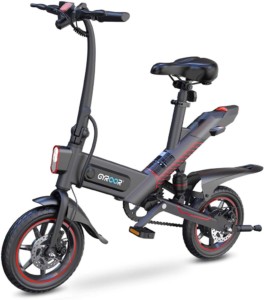 Riding the eBike and exploring has been fun, but not as fun as on an eScooter! However, both technologies allow me to zip around the neighborhood in speeds of 15+ mph, bringing some thrills and excitement to an otherwise boring day. Though I feel like a clown riding on this “circus bike” (I am not a fan of foldable bikes and their “unmanly” looks when compared to my dear Santa Cruz mountain bike), my wife has absolutely no problem riding it. She does, in fact, praise the motor assistance when on particularly challenging slopes — tracks where she would find me huffing and puffing at very low, slow gears. She would be the rabbit and me the turtle.

I was happy (though perplexed) to learn that eBike laws are far less restrictive than eScooters.

The Gyroor C3, with its dual disc brakes, fairly powerful 450W motor, and acceptable 360Wh battery, provides for a good travel range, making it entirely suitable for riding to and from work. I wished that the wheels were larger, that additional gears would be available to shift with, and the LCD displayed the speed, but at this price point, it is a great performer with a racer-like look and comes with an easy, yet cautious (due to the single gear) recommendation.