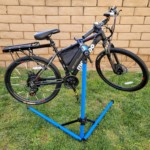 I had put together a few mechanical and electric bikes over the past 5 months for friends and family so we could ride together with our kids. Non-motorized bikes were not a problem at all as they were all fairly light, but some of the eBikes were quite heavy. One was the 66-pound Macwheel Ranger 500! It was not until I had worked on a Sridar mountain bike for my youngest brother did I realize how annoying it was to constantly have to get up, flip the bike around, and do all sorts of acrobatics and lifting to work on the parts I needed to look at. It eventually started bothering my lower back, and I also came to realize how much of my own, free time I had been wasting to help my brothers and friends save on bike repair fees. So, I asked them to buy me a repair stand if they would like me to continue maintaining their bicycles. They all agreed.

Disclosure: I received this product as a gift from my brothers and a few of my friends. Although I did not pay for the item, the opinions expressed here are honest and my own.

Is it worth buying a bike repair stand?

It may seem insignificant, but working on a bicycle on the ground — especially a heavy one — can be difficult and uncomfortable. From laying it upside down to service the gears and brakes, to flipping it back up to look at the shifters and handles, it can get overwhelming with constantly having to stand up, sit down, and position one’s body in some odd ways to reach specific parts. The lighting in my garage also does not contribute well to visibility at certain angles, forcing me to re-position the bicycle or myself again. It can get very annoying.

A bicycle repair stand is worth it. It saves time, makes it more comfortable, and lowers the risk of getting hurt.

Does it matter which repair stand to get?

My brothers and friends initially bought me a Vivohome Specstar. Its feature set looked great: the bike could be moved up, down, rotated around the clamp in 360 degrees, and — uniquely for that product — turned 360 degrees parallel to the ground. Putting it together was simple and bike maintenance was like night and day! No more crouching down, flipping things around that would eventually hurt my back, and a pleasant realization came: BOTH my hands were now free to do work.

Unfortunately, the Vivohome did not work for all bicycles. The Macwheel Ranger 500 electric bike at 66 lbs was too heavy for it as the stand was only rated for 44 lbs. Furthermore, its 4 feet could not be folded away and thus took up a bit more garage space than my wife liked. I agreed with her.

A repair stand freed up both of my hands to do work more efficiently and less frustratingly.

We came to realize that there are differences between repair stands after all. Weight capacity, ease of use, price (of course), and storage size came to mind. One of my coworkers (and former bike mechanic during college) recommended the pricey Park Tool PCS-9.2 with a capacity rating of 88 lbs. If we did not want to spend that amount of money, he referred me to the similar-looking SereneLife SLBKRS3 that is rated for 67 lbs. That was the one we got.

The SereneLife SLBKRS3 bike repair stand looked just like the Park Tools PCS-9.2 but for $25 less at the time of this writing. Assembly was simple, though the instructions were missing two details that I thought would help make the build more straight-forward and fool proof (see ASSEMBLY section of this review). Once everything was in place, I was happy to see how much better its material was compared to the Vivohome Specstar, and right away one could feel how sturdy it was as well.

Loading the heaviest of the electric bikes, the Macwheel Ranger 500 at 66 lbs, was simple as the clamp held it well in place by the seat post. It could be rotated around with ease, and at no point did the base of the stand feel it would topple over. In fact, I additionally hung a backpack with about 20 lbs of backpacking gear onto the bike, and the stand was able to still stand solid on its feet. That made me wonder why SereneLife rated its product for 67 lbs when it was able to hold 86 lbs just fine. 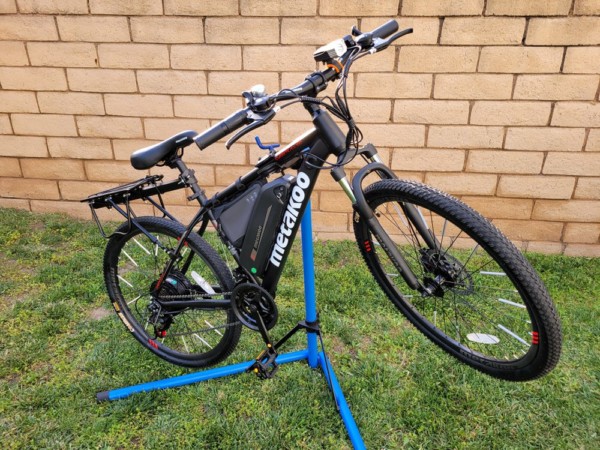 Putting the repair stand away for storage was a simple, straight-forward process, and although it did not fold 100% flat, it went slim enough to be stored in a garage corner thanks to its foldable feet. Brownie points with the wife there!

I could no longer imagine working on bicycles — especially the heavier electric ones — without a repair stand. Work got so much easier with both hands freed to tune whatever parts were needed without constantly fighting gravity and consciously minimizing strain against my back from constant lifting and bending. Which repair stand is best for you depends really on your budget and the weight of your bicycles. For me, the SereneLife SLBKRS3 more than meets my needs. 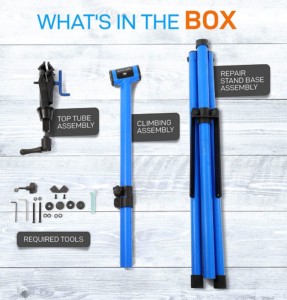 What’s in the Box /SereneLife

The instruction guide was very easy to follow. Really. There are just two steps that I believe would help clarify assembly better and make it more fool-proof to go along with. 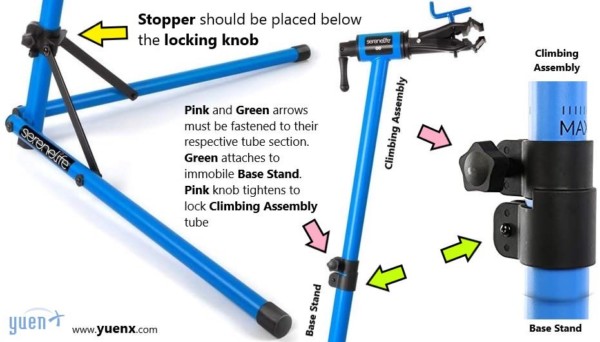 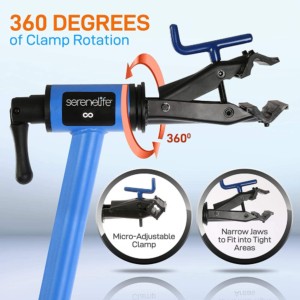 You can secure the bicycle to the clamp in one of these ways:

Taking down the bike stand was simple:

Store in a dry place. In my garage, I run a bungee cord through the clamp neck and attached it to a stud in the wall to prevent it from tipping over and causing injury to our children. 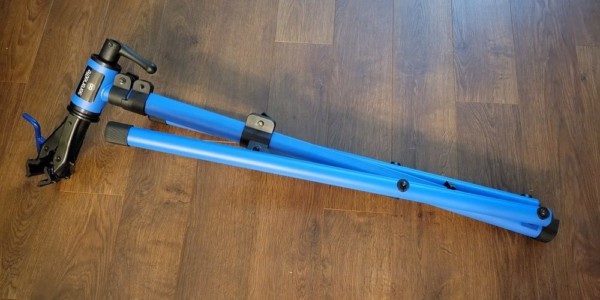 Folded and ready for storage

The SereneLife SLBKRS3 is a pricey stand. It is very sturdy and has been saving my sanity and body from pain and frustration. I like it a LOT! Now, let’s get out biking!