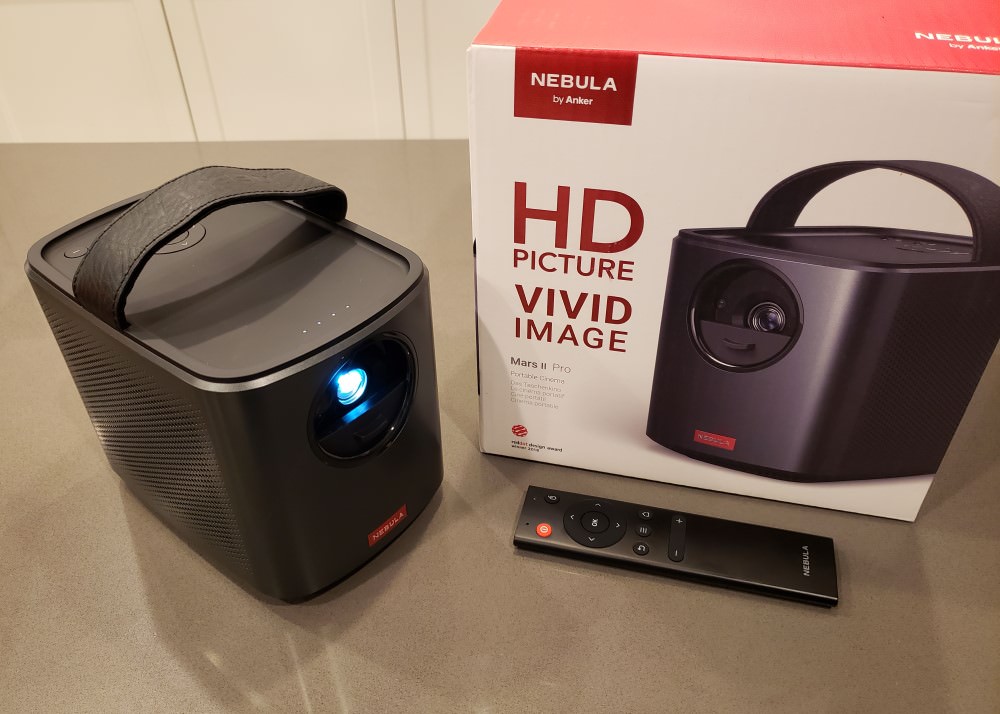 Finding good, portable projectors for small-group, outdoor movie nights has been a disappointing quest over the last, two years. From $60 to $300 devices, each had much to like but also left a lot still to be desired. There were the big ones that output excellent, bright images but were more geared towards the home or office with HDMI/VGA connectors, small ones that were very portable but lacked the brightness and sharpness, and more recently, minis that could operate off a battery but also sacrificed image quality, input options, and good sound. I eventually did find one that checked off almost every one of my requirements.

This review will go over some projection basics that helped me decide what was right for our family. 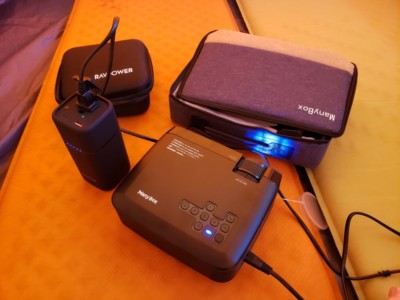 Among all the projectors I had tested over the years, last year’s ManyBox V501 was our favorite: it was small, decently bright, did not draw too much energy from a portable battery station, but suffered from speakers that were tinny and only adequately loud for a small room setting. Yet, its number of input options, including USB and microSD, won my heart because that meant not having to bring along a laptop to play a movie from. This year’s summer had put that to the test: we played a movie off the side of my car while getting ready for backpacking the Kings Canyon National Park wilderness the following day. It was connected to a RAVPower 80W AC Power Bank, lasted nearly two hours, and made for a very, very happy son!

Parents would likely agree with me: a father would do almost anything to create fond memories for his children. That trip prompted me to make a few financial sacrifices and finally look at the highly-rated Anker Nebula Mars II Pro that was launched in March 2019. At a cost of $549, the decision to spend so much was not taken lightly. This review will share our experience with the top-end projector from one of my favorite battery companies: Anker.

Portable projector test while camping in 2020

Anker caught my attention with its stunningly looking Nebula Capsule, a soda can-sized, battery-operated projector capable of outputting 100 ANSI lumens (approximately 700 lumens) to a maximum screen size of 100 inches. It claimed to have immersive, 360 degree sound through a single 5W speaker, Android 7.1 based apps, and up to 4 hours of playtime. Price tag: a whopping $350! I saw no need to have such an expensive projector for occasional movie watching.

Fast-forward a few years later when I am now responsible for the happiness of two children, and the situation has changed. The Nebula Mars II (and its Mars II Pro variant) improve upon their predecessor in a number of ways, as illustrated below. 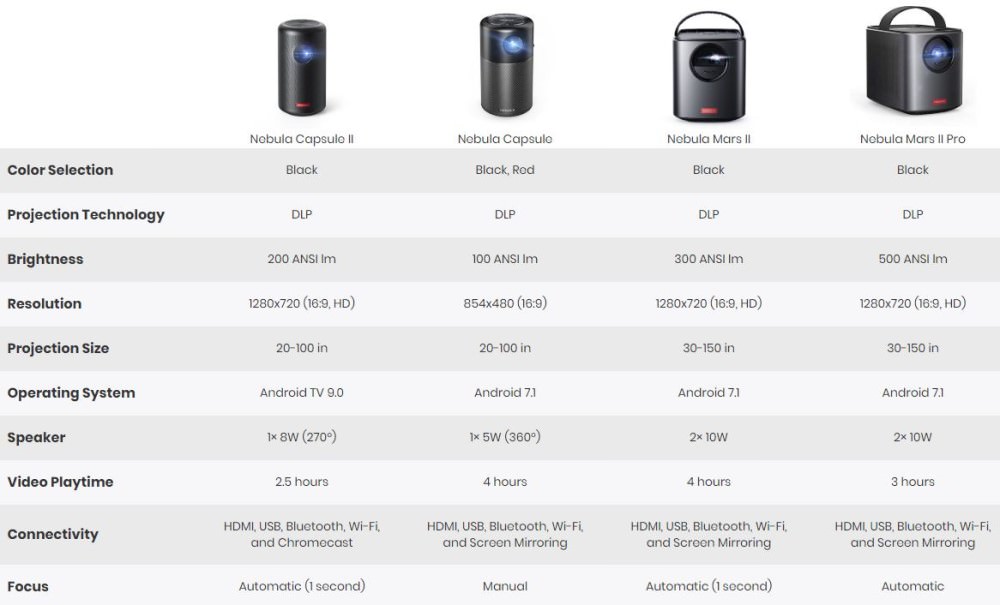 Notable upgrades the Mars II has over the original Capsule include:

As I had shared earlier, I somewhat reluctantly purchased the Anker Nebula Mars II Pro after seeing how happy children were watching movies while camping in the backyard or going on a road trip. The additional benefit of having the engaged kids stay safely seated nearby while the adults were preparing dinner at camp made the heavy price tag a bit easier to swallow. Particularly, it gave us some peace of mind and some much-needed quiet time by not having to constantly check on and remind them to be visible at all times. The nerdy me further justified the purchase by calculating the number of years with which it could help create memories, and the annual cost of ownership would no longer be so bad. Right? Nod “yes”.

So, what do we like and dislike about this projector? Is it worth the cost? Let’s take a look! 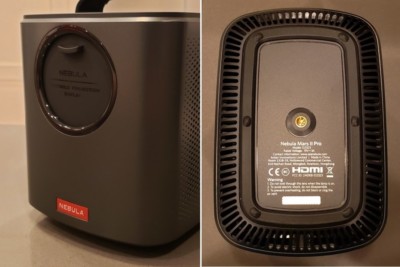 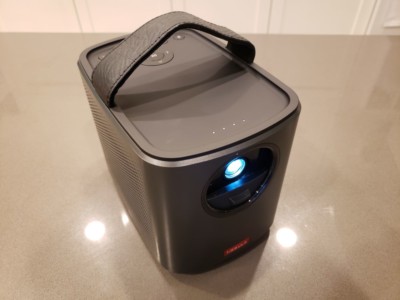 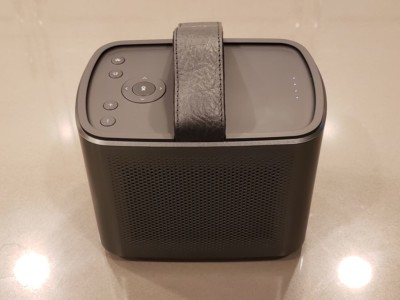 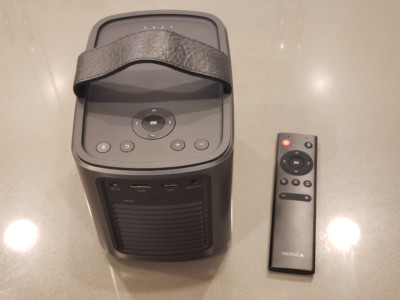 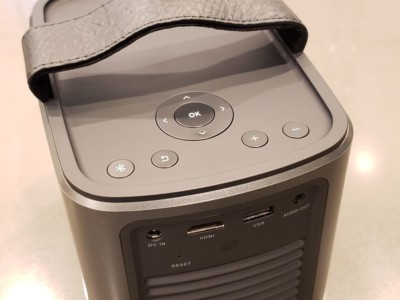 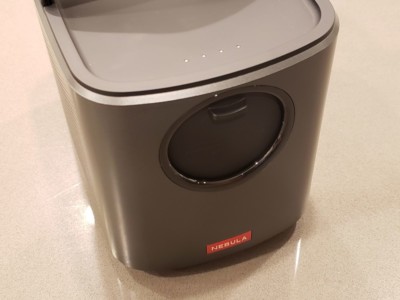 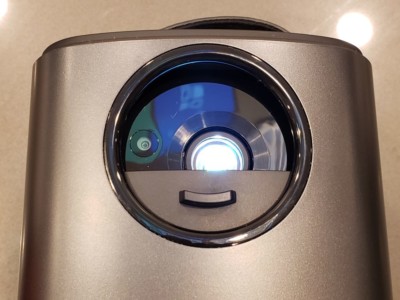 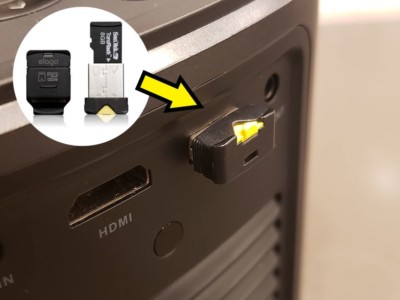 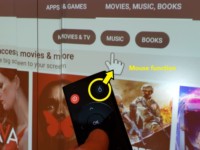 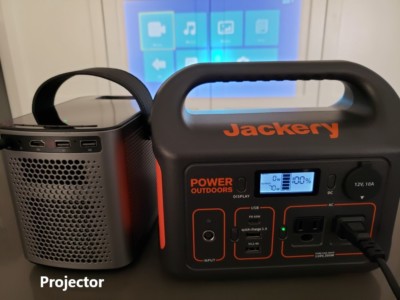 Warning: A firmware upgrade that is interrupted by a power failure can brick your unit.

Anker’s Official Nebula Mars Carry Case has a minimalist design and fits the projector, remote, and AC adapter perfectly. It is built well with adequate padding and a nylon exterior. For the more cost-conscious owner, consider the slightly less expensive Aproca Hard Travel Case. I chose not to buy the Aproca one because the official case looks a lot better, and because I worry the AC charger could potentially scratch the top of the projector. 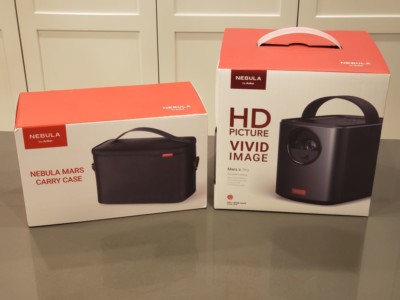 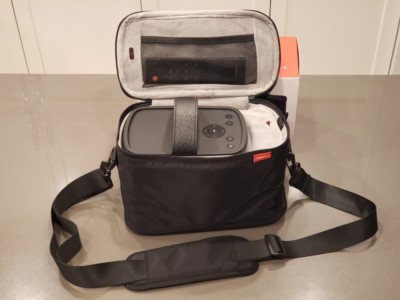 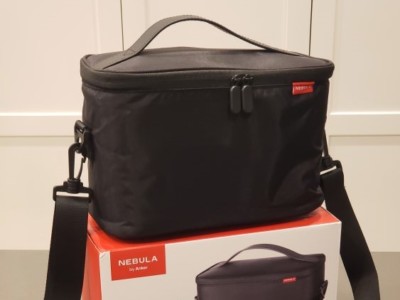 Disclosure: After Anker came across this review, an official Nebula tripod was given free of charge with no expectation to write an evaluation. My honest, unbiased opinion of the Nebula Mars II Pro did not change as a result of their gesture. Learn more

The official, universal tripod allows the Mars II projector to be positioned at nearly any angle and on (un)even surfaces. It very much works like a decent quality tripod used by photographers by securing the Nebula onto a removable ball head. At $80, however, I find that most consumers will likely find it pricey for home use and be better suited as a professional accessory at a business meeting. Those on a budget can find cheaper alternatives that accomplishes the same, basic concept of positioning the projected image, but keep in mind that they would likely be of lower quality and be heavier. This tripod can also be used with cameras.

Its ball head can be removed and attached to other tripods that have a standard screw mount. For example, to minimize bulk and weight when I go camping, I put it onto a portable, Aukey mini tripod to keep the projector off the dirt.

If you are on a budget, take a look at the less expensive XZC Projector Tripod.

For a very long time, the lack of an apple-to-apple comparison between projector brightness had been a source of frustration. Measurements I had commonly seen were in lumens, ANSI lumens, and lux — and even then I found that two projectors with the same rating did not produce the same amount of brightness. Worse yet, a 6,000 lumen unit was dimmer than the 500 ANSI lumens (which generically is about 3,500 lumens) of the Nebula Mars II Pro during one of my tests! So, I did some digging in an attempt to better understand light measurements. You will find that there is no easy way to convert ANSI lumens to generic lumens.

Some manufacturers overstate their lumen rating in an attempt to sell more without regard to how the disinformation could hurt their brand — and customer trust — in the long run.

Projectors often include the Contrast Ratio in their list of technical specifications. It is a measurement of how dark and light the respective areas can be rendered, looking for the difference between the brightest and darkest pixels. For example, when watching a movie, you want the black to be as deep/dark as possible without affecting the lighter parts of the scene. This would result in a better experience with sharper, more detailed images and colors.

A higher contrast ratio is generally better and can go as high as 10,000:1 (white is 10,000x brighter than black), though the human eye will have difficulty discerning the miniscule difference past a certain point. A good ratio to look for should fall between 1,000:1 and 3,000:1. With all that said…

The contrast ratio practically is a meaningless specification. Ambient light and other factors can SIGNIFICANTLY affect the contrast, and as such, one should focus more on darkening the room and using a good projection screen. An optimally low-light room would yield no visible difference between 300:1 and a 50,000:1 contrast ratio.

Some sources use a 7x factor to convert lumen to ANSI lumen. Although this is NOT ACCURATE because of the many factors involved that affect brightness, it provides a generic reference to which to compare products by. Remember, ANSI lumen takes into consideration the projection distance, screen size, and 9 measurement points, whereas lumen only measures a light source’s fixed intensity regardless of the aforementioned elements.

Common ANSI lumen ratings recommended for various room sizes are shown below. Keep in mind, however, that image brightness can be affected by ambient light, projection distance, screen size and type, light output technology and age, and other factors.

According to Viewsonic, two projectors with the same ANSI lumen rating may appear different in brightness due to the human eye being “more sensitive to certain wavelengths of light”. In other words, more color-saturated images appear to be brighter as the result of the HK (Helmholtz-Kohlrausch) Effect. In the simulated illustration below, columns 1 and 2 have the same ANSI lumen rating, but the left appears to be brighter. Likewise, columns 2 and 3 appear to be equally bright but have different ANSI lumen measurements. 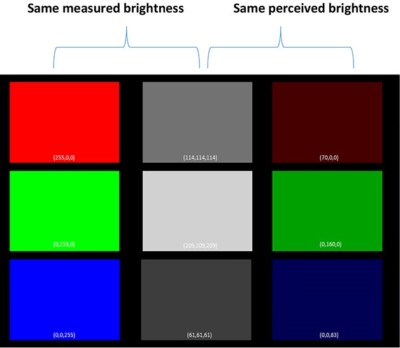 Furthermore, Viewsonic also points out that LED-based projectors produce higher, perceived brightness over older lamp ones despite having the same ANSI lumen rating.

Did you know? A projection screen with a gain rating of 1.0 preserves the image’s brightness, whereas a higher or lower number will respectively increase or decrease it. For instance, the Gain rating of 1.1 with the 100BTF Screen with Stand ensures the image brightness is not hampered by that product’s material.

There is almost no visible difference in quality between DLP and LCD today.

According to Wikipedia, Anker was founded in 2011 by Steven Yang, a former Google software engineer, who shifted “its focus from replacement laptop batteries to smartphone battery [and] wall chargers.” Indeed, I witnessed the Shenzhen, China, based company’s steady rise in brand recognition for its batteries, cables, and wall chargers on the Amazon Marketplace, competing against more established players like Belkin for quality products at lower prices. The company has since added several brands to its portfolio, including audio-focused Soundcore, Eufy smart home devices, Nebula video projectors, and ROAV car accessories.

One notable observation over the years of having owned Anker products is their focus on excellent customer service. The company truly stands behind its products and listens to customer feedback, including to some of my critique and criticism of this Nebula Mars II Pro projector. Without hesitation, Anker is a brand that I have come to trust for a long time.

The Nebula Mars projector had been an excellent way to view movies outdoors with its built-in battery, portability, brightness, and sound quality.

Keeping kids busy at camp while dinner/cleanup were under way 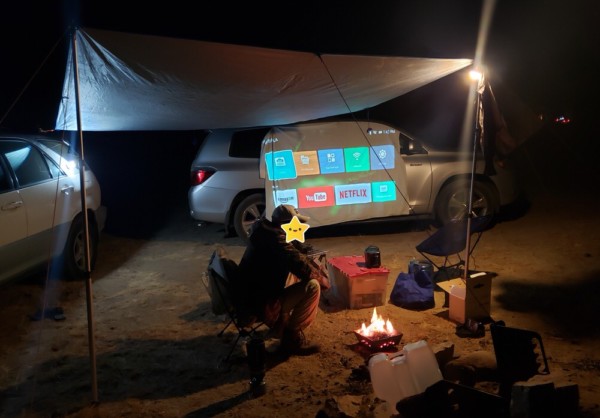 For a mini projector and after years of trying several out, the brightness, crisp sound, portability, beautiful design, and feature set of the Anker Nebula Mars II Pro blew me away by stretching a satisfied smile from ear to ear. It easily relegated our previous favorite, the ManyBox V501, to the shelves or sale/donation pile because an external power source and speaker were no longer needed. 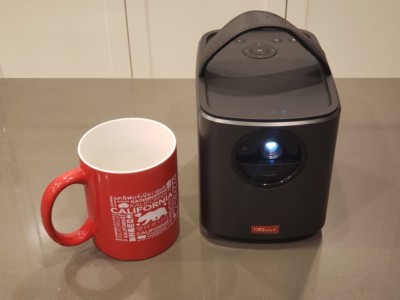 The heavy price tag at times turned my smile into a worried frown of potentially having made a stupid, expensive buying decision, but the ability to install Android apps to stream video content and play games with powerful sound made for a very enjoyable, portable viewing experience. There were some issues and limitations that held me back from giving this product a perfect score, but one can hope that Anker will address some through a future firmware upgrade.

Overall, my wife and I agreed that seeing the joy coming from our children, their cousins, and friends has made this Anker a worthwhile buy, and without hesitation, makes for an easy recommendation. Two thumbs up!

Note: I came to realize during the course of writing this review how difficult it was to sort through reliable information on projection technologies so intertwined with technical jargon and misinformation, even some respectable publications contradicted one another. All that confusion does not give me full confidence that everything I have learned is correct, but hopefully, it is enough to get you started on choosing a projector that is right for you.

For an Anker 4K Projector, check out our Nebula Cosmos Max review.