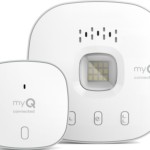 The Chamberlain myQ provides a homeowner the option to remotely control the garage door via a smartphone app with real-time notification and other conveniences. The product description touts the following selling points:

There were a couple times where one of us forgot to close the garage door for an extended time period — even overnight one time. I purchased a myQ Smart Garage Hub during an Amazon Treasure Truck deal for just $16.89. For that price, convenience, and the possibility of ensuring the garage was always closed every night, I really, REALLY wanted to like the myQ and almost kept it — until I ran into an issue that my brother and friend both warned me about.

I really, REALLY wanted to like the myQ and almost kept it — until I ran into an issue that my brother and friend both warned me about.

Before we get into the details, I would like to preface that I have been in IT for over 17 years and my primary occupation is in Cybersecurity. Having the ability to open the garage from anywhere in the World via WiFi rang THOUSANDS of alarm bells in my head. But, for the sake of trying out garage door automation, I decided to give Chamberlain the benefit of a doubt to have its customers’ data and security in their best interest and decided to give it a try.

Security Concern: Having the ability to open the garage door from anywhere in the World via WiFi rang THOUSANDS of alarm bells in my head.

Installation was simple. Downloaded the myQ app and followed the steps it provided. 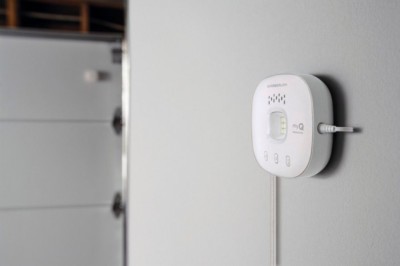 I had placed the controller at the back of my garage for testing purposes before finding a permanent place to secure it to. The app recommended to put the controller closer to the door opener itself once operation was confirmed working. Another reason I had the controller at the back was to put it closer to my WiFi network. One of the complaints my brother had was that WiFi connectivity would often drop. One way to fix that is to get a Mesh WiFi system like the one I had reviewed and recommended: Linksys Velop. 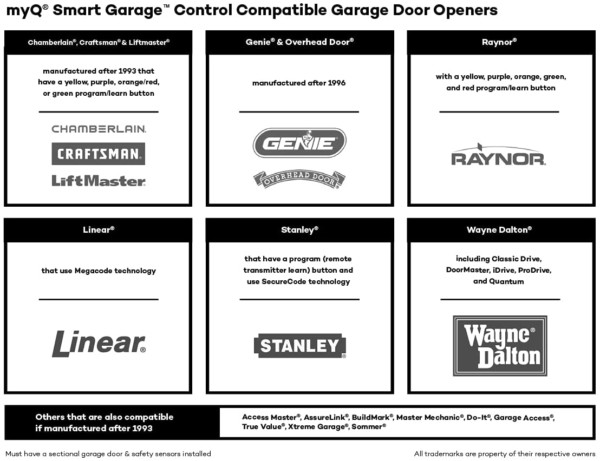 The garage door could be controlled through the myQ smartphone app (available for both Apple iOS and Android) with the simple push of an on-screen button. The app showed how long a door had been left opened or closed, and it was possible to schedule what time and on what days to have the door automatically closed. For security reasons, the app would not let the opening of the door be scheduled. Nice catch, Chamberlain!

The myQ door sensor helped sense whether the door was open or closed. I thought it would do so via some sort of infrared or laser beam with the myQ controller, but that did not appear to be the case. Instead, I believe that there might be a built-in gyroscope that told the sensor what position it was in (tilted or positioned straight up). If there was a tilt, the door would be in the Open state, and no tilt would mean the door was closed. That begged the question about how sensitive that tilt sensor may be — if you had the door only cracked open slightly, would it think the door was closed? In one test, the app found the door open when it was opened just 1″. Excellent! 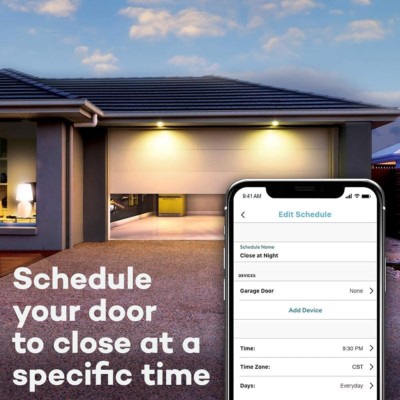 When I asked the app to close the door, the myQ controller blinked bright LED flashes and emitted multiple, loud beeps before the door actually closed. This was to warn people to stay away from the door.

There is a limited number of people, like friends and family, you could delegate control of the myQ device to without giving away your account credential.

In my testing, I found that internet access was required to issue Open/Close commands and to set up and execute schedules.

I first programmed a schedule to close the garage every night in case one of us forgot to do so. Then I disabled the Internet for the myQ device and observed whether the schedule would kick off the program. It did not. That confirmed that internet access was required not just to open/close the door, but to also execute any schedules. What that also meant is that if your myQ’s WiFi connection was unreliable, you may find yourself stranded without the ability to open the garage door.

You should be aware that there was no way to be notified by the app or via email that the Internet was not accessible. The status could only be checked by looking at the myQ app. What I had also found was that when someone opened or closed the garage during an Internet outage, I was understandably also not made aware. But what did surprise me the most was what happened when myQ was able to reach out to the Internet again: a flood of notifications arrived in the app and/or email but with the incorrect timestamp. For example, if the myQ could not access the internet between 1pm and 3:31pm, and I had opened the garage at 2pm and closed at 2:20pm, the notifications would show the the open and close actions as 3:31pm  (the time when the internet access was restored.) It should have been 2pm for open and 2:20pm for close. Timestamps were only accurate for as long as internet access was available.

Something else to consider: If the myQ service is down, you effectively also lose control of the garage door, including any schedules that were set to run. The myQ servers happened to actually be inaccessible at the time of this writing — what a coincidence!

Your garage door and and any schedules would not function if or when the myQ service/servers experienced downtime.

As stated before, security is of great concern to me. WiFi, radio frequencies, and Bluetooth all can be hacked with enough time and determination. These were the security concerns I had and what steps I took to address them:

Without two-factor authentication enforced onto myQ accounts, Chamberlain may not be too far away from being in the news about their customers’ data having been compromised and garage doors being under unauthorized control.

You may have nothing to hide on your computers and not care if a hacker got onto your home network, but an attacker could gather information about your family’s interests and behaviors they could later use for nefarious purposes. 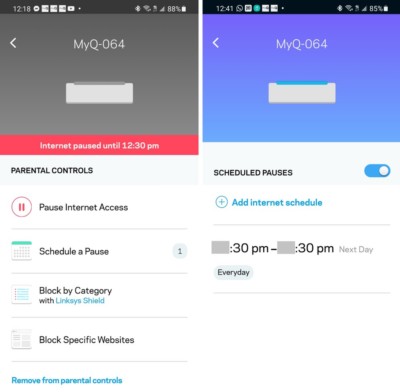 Here were some operational issues I had encountered. 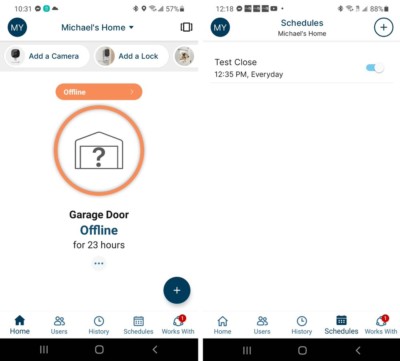 This issue was a BIG one that made me decide to return it. My friend had previously warned me about it, and some online reviews also had mentioned it. From time to time, the sensor may detect the wrong state the garage door is in. When the door was OPEN, the myQ thought it was CLOSED, and vice versa. My friend said that sometimes, the schedule to CLOSE the door actually ended up OPENING it because it thought the door was open when it was actually closed. I experienced that too. Nothing I did would put the sensor and actual door state back in sync until I power cycled the myQ controller. Having the door accidentally opened by the device at night and left that way overnight was too much of a risk I was unwilling to accept. Sorry, Chamberlain, that drew the last straw.

With the myQ incorrectly sensing the garage door’s actual open/closed state was too much of a risk I was unwilling to accept.

myQ is free to use and its basic function of opening/closing the door is included. However, to integrate with Google Assistant, Amazon Alexa, and other automation methods, a subscription was required. With that said, I would not use a voice assistant anyway because that would add another security concern:

Beware of having a smart voice assistant controlling the myQ.

The myQ Chamberlain Smart Garage Control provided some nice conveniences in the way it allowed the garage door to be remotely controlled with real-time alerts and schedules. Some of the features I particularly liked were the ability to be notified when the door was left open for too long, and to have the door closed on a daily schedule in case we forgot to do so. It also would have allowed us to let friends, family, or authorities (like Police, Medical, or Fire) into the house through the garage when we were not available. That is — only if the Internet was accessible and the myQ service/servers were online and available. 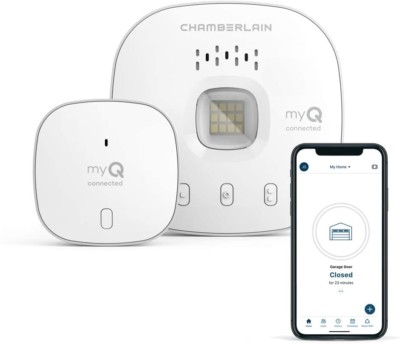 As much as I really wanted to like and keep the myQ, I was unfortunately very disappointed when the sensor did not always match the actual state of the door. It thought the door was closed when it actually was open. That mismatch was too high of a risk for my family and I to accept.

I was able to address some security concerns around the myQ device by limiting the time period it could operate within, but that required some technical knowledge that most consumers probably would not know how to tackle. Whether we could trust Chamberlain to keep our data (and thus, our home) safe would be up for debate as any company could be hacked nowadays. Furthermore, I was baffled to see that the myQ account did NOT offer two-factor/multi-factor authentication as an additional step to secure my profile and, by extension, control of my registered devices.

For all the reasons mentioned, I decided that my family’s life and property were not worth the convenience of having a device remotely control our garage door at this time. We set up a nightly reminder via Alexa or Google Assistant to tell us to check the garage door instead… in a modernized, old-fashioned way.