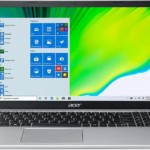 I have been in the professional IT industry for over 18 years and tinker with technology all the time for both work and fun. I am an enthusiast through-and-through who likes to explore the latest in the industry. For this particular review of the Acer Aspire 5 (2021), my extensive experience with Android, Apple iOS, and Windows phones and tablets will lend a helping hand in understanding what this laptop may or may not be suitable for. I had also recently reviewed a HP Chromebook 14 and will provide some comparisons for those of you considering Google’s ChromeOS laptops. 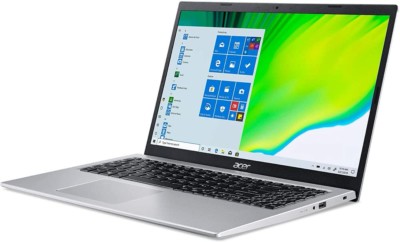 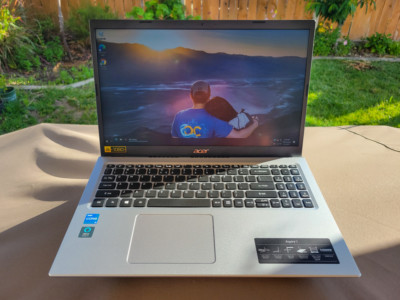 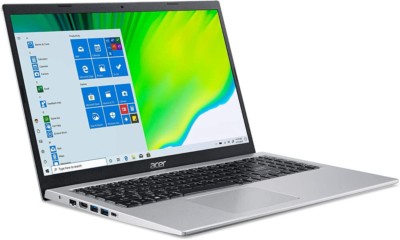 This 2021 Acer laptop (A515-56-36UT/ NX.AASAA.001) with Intel’s latest Core i3-1115G4 processor is a solid, general-purpose laptop with a decent battery life of about 6-8 hours, depending on what you do with it. It handled office type work and internet browsing very well (as expected in today’s computing), but struggled with heavy photo or video editing with long delays. Intel’s Core i3 processor is not meant for performance but makes up for it with great battery life.

Its exterior design is very minimalist, slim (0.7″) and light enough (4 lbs) to hold one handed, but unlike the Microsoft Surface Pro, your arms will eventually tire out. The lid can be opened with one hand with very little flex, but the screen itself has a disappointing viewing angle. You must be at a precise height to see most of the 15.6″ display well enough, but the top and bottom edges were fading towards the darker side with washed-out colors no matter where I positioned my eyes. Expect no vibrant screen even at its brightest setting. Mind you, I am used to much more expensive laptops and external monitors with amazing viewing angles, and for an Acer laptop in this price range, I should not hold it to the same standard. Furthermore, the Acer’s body is essentially plastic all around (with the lid being made of aluminum) and certainly will not scream “premium”. 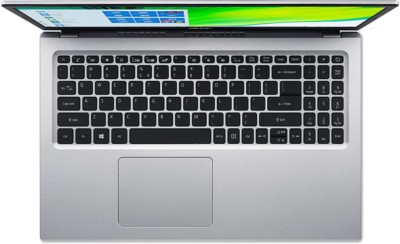 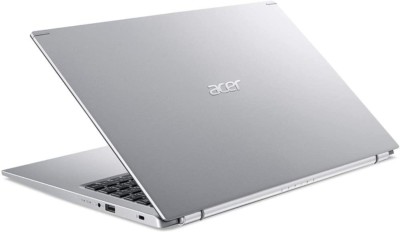 The memory and storage can both be upgraded thanks to an extra RAM and 2.5″ SATA drive slots. You can achieve significantly more performance by upgrading the included 4GB memory with an additional 4GB (up to 16GB) stick (for a total of 8-20GB). I suggest you get one from Crucial, Kingston, Samsung, Micron, or Hynix by searching for “DDR4 SODIMM” (either 2666 or faster 3200). Upgrading is a simple matter of powering off the laptop, removing the battery, touching a grounded metal to remove static from your body, then opening the screws at the bottom of the laptop, and carefully inserting the new part(s) without any force.

Intel’s Core i3-1115G4 processor is dual-core to allow for multiple applications to run more efficiently (and it does so significantly faster than its predecessors), and the built-in Intel UHD G4 graphics processor is capable of light, casual gaming, including Grand Theft Auto 5 at 1920×1080, 30-50 FPS, and Normal detail settings. That’s pretty impressive for a budget processor! This means that gaming was possible with League of Legends, Fortnite, NBA 2K21, Counter-Strike Global Offensive, Minecraft, and even Battlefield 1. 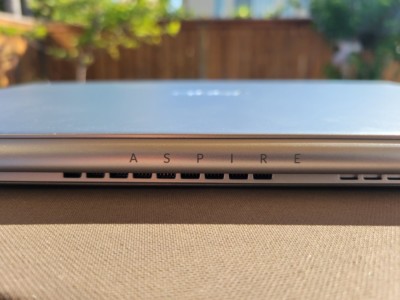 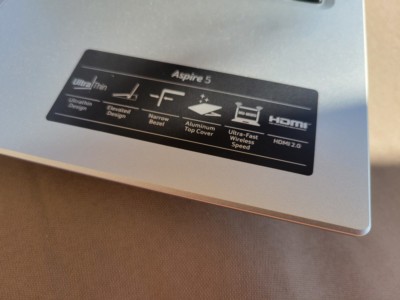 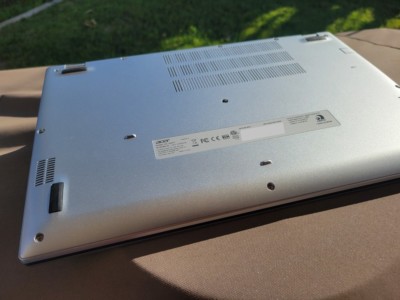 Wireless performance was in line with expectations, and if you have a WiFi 6 capable router, this machine zips along a tad faster than with older routers. Its 128GB NVMe SSD flash drive (made by Samsung in my unit) ensures fast retrieval and writing of data to long-term storage and scoffs at lower-priced laptops that still use the really slow eMMC drives.

Speaker volume and output is as expected for a laptop of this class: tinny and just loud enough to comfortably watch a movie with in a small, quiet room. Typing and using the touchpad felt natural, though some extended keys were not where standard-sized keyboards would have them — a common problem for more compact laptops. I was disappointed to see Acer ship the laptop with a proprietary barrel plug instead of using USB-C.

Windows S is included — a version of Microsoft’s operating system that promised more secure, faster, reliable computing in its bid to compete against Chromebooks. Microsoft had previously tried with the ill-received Windows RT, and like that one, Windows S had also become a failure in that the market still is not ready to give up the compatibility to run legacy applications that Windows had been known for. Thankfully, there is an easy, one-way to upgrade to the full Windows 10 Home experience for free.

Compared to a Chromebook, I much prefer this Acer because it comes with full computing functionality. Chromebook had been doing very well in the education sector, but nothing compares to having the flexibility to run and do anything with your laptop that runs a full version of Windows. So, although Chromebook excels in all-day battery life (10+ hours), I would pick this Acer over it despite the slightly higher price. 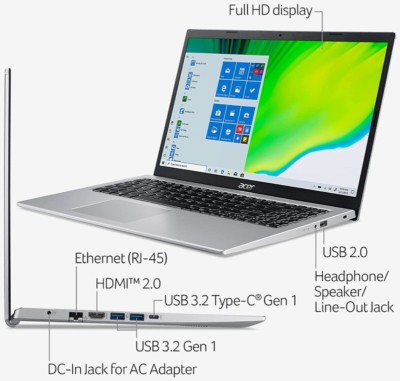 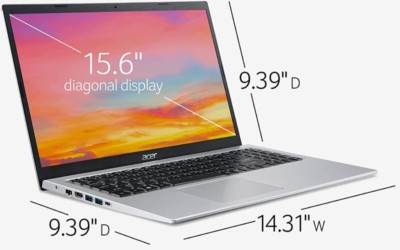 I am a huge supporter of the Microsoft Surface Pro, Surface 3, and Surface Go type form factor. However, one of their biggest disadvantages is that they are not entirely comfortable to use on your lap as their kickstands dig into your skin. That is where laptops excel: sitting comfortably on your lap — that is, if you can withstand the heat that some powerhouse computers put out. Thankfully, this Acer does not create too high of a heat due to its use of Intel’s lower-powered Core i3 processor.

Alexa worked fine out of the box and is more preferred over Microsoft’s own Cortana voice assistant. I turned it off, though, since Alexa annoys my family and I at times with its wildly inaccurate results to our questions when compared to Google’s Assistant. Still, Alexa is a good option over Cortana.

A brief guide was included in the package, and the full manual can be found online on Acer’s website.

This Acer Aspire 5 makes for a great, day-to-day, no-frills computer for casual work, web browsing, media consumption, gaming, and Windows Store app usage. I just wished the display was much better, but what can you expect at this price? It makes for a great, inexpensive travel laptop that I would not shed a tear for if it broke or got stolen — just make sure you enable drive encryption so thieves cannot get to your data. 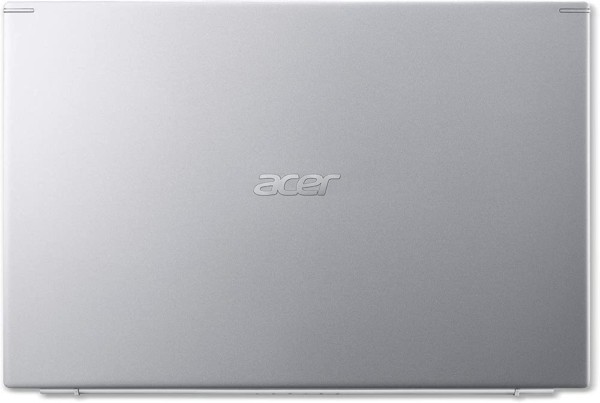 Read on to learn more about what CPUs, WiFi 6, Chromebooks, and the disk storage differences are.

What is an Intel Processor?

The CPU (processor), the “brain” of a computer, is an important piece to gauge performance. It is responsible for processing all the general calculations and instructions to carry out everything an electronic device can do. The faster it can “think”, the faster things will get done.

Intel has maintained a significant lead in the computer industry with only AMD having been its noteworthy rival for decades. AMD had actually made a significant comeback with its Ryzen product line to compete against Intel’s flagship “Core”. The numbering scheme for Intel goes like this (from lowest to highest performance): i3, i5, i7, and i9. AMD’s Ryzen series mirrors that. Essentially Intel’s Core i3 is the least expensive and targets consumers wanting a basic computer to do basic things like web browsing, office work, media consumption, and casual gaming with better battery life than the higher models. Core i7 and i9 target hardcore users who want top-notch performance.

The new WiFi standard is not just about speed. It can more efficiently send data to multiple devices at once (like a delivery driver stopping by multiple clients on the way to the final customer), improve battery life, and security. However, the router and devices must all support the new 802.11ax standard for the benefits to be realized.

WiFi 6 is 100% backwards compatible with WiFi 5 and older devices and as such is more future proof.

What is a Chromebook?

It is important to first and foremost understand that Chromebook is precisely that — a laptop (notebook) based on Google’s Chrome operating system (OS), software that allows you to use and interact with the hardware. It offers a minimalistic, web browser experience that is far different from Windows and MacOS, but may appear familiar to Android users.

Newer Chromebooks offer the Google Play Store from which you can download apps, games, and consume books, music, and movies — just like a Samsung smartphone or Google TV device. It also offers apps from the Google Chrome Web Store that are very limited in functionality but can enhance the web browsing experience with extensions (plugins).

Chrome OS is today’s dominant computing system used within the Education market, an area that Microsoft had been trying to challenge with its failed Windows RT and Windows S-Mode efforts. Apple, too, trails behind Google’s Chromebook platform. Unlike Windows and MacOS native programs, however, most web apps within Chrome OS cannot be used without having internet access. A subset and many Google Play Store apps can, such as Netflix and Gmail.

In Short: Chrome OS, which was launched in 2011, very much feels like an Android tablet slapped onto a laptop form factor. It does not offer a full PC/Mac experience and essentially is a (usually) low-cost/low-powered computer whose main interface is the Google Chrome web browser.

I much prefer a Windows laptop over Chrome OS for everyday computing (like this Acer Aspire 5, the Lenovo IdeaPad 3, or Microsoft Surface Go 2), even if I had to pay a bit more for that flexibility. However, the education sector does prefer the latter like the one that powers the HP Chromebook 14.

Replacing or adding a 2.5″ SATA drive, M.2 SSD, or RAM is generally hassle-free. Simply pop off the screws found at the bottom of a computer to reveal the storage/memory slots. Be sure to educate yourself about which parts to buy, as I will explain below.

SSD and HDD connect to your computer via multiple interfaces. Relative to most Mini PCs and Laptops, we are only concerned with the SATA and PCIe ones. SATA can connect two drive types:

Mini-SATA (mSATA) is older and slower than M.2, and the latter can also connect to the newer, significantly faster PCIe interface (those drives are known as NVMe M.2 SSD).

A M.2 SSD 2280 is 22mm wide and 80mm long. This is important to know, especially with Mini PCs or Laptops where space is scarce. If you purchase a 2280 drive and the computer only has room for 2230, you would not be able to use the former.