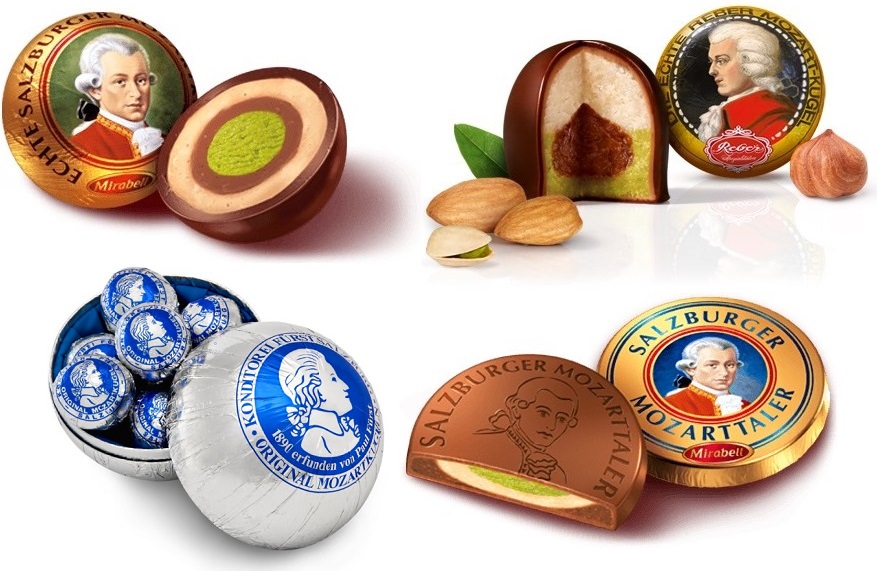 For ten years, my home was Vienna, Austria, and the sweet tooth of my young self had found many favorites. Among them were cakes, chocolates, and other Viennese desserts. In this review, we will take a look at one of my all-time beloved chocolates: Mozart Kugeln (by Mirabell, Reber, and Victor Schmidt/Manner). Decadent, smooth or nutty, sweet, and wrapped in a ball of goodness, the rich, milky chocolate taste brings a bit of luxury and indulgence to an otherwise boring day.

These were my favorite sweets growing up.

Between the two, Sacher is the more famous one although most of my family enjoys the Imperial for a lighter, nuttier, more textured taste. 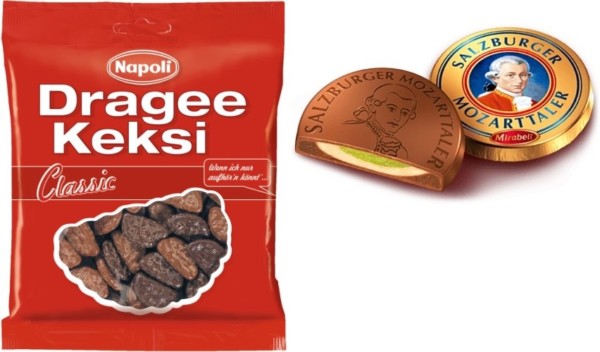 My mother used to make the Sachertorte, Vanillekipferln, and Wiener Schnitzel (Viennese Cutlet, not the Californian hot dog chain) every birthday and Christmas, but since I had not yet translated her written, German recipe book to English, she likely will not for a while. Nonetheless, one sweet I had been buying every 8-12 months through the Amazon Marketplace had been the Mozartkugeln (100-piece package) that were then shared with family, friends, coworkers, and neighbors. They are difficult to find in the United States and are expensive to have delivered directly from Austria. However, seeing the smiles on everyone’s face makes the roughly $0.75 – $1.07 delivered cost per piece worthwhile as an occasional treat.

The questions commonly asked were:

According to Wikipedia, the pistachio marzipan (almond), nougat, and chocolate-covered confection was invented by the Salzburg-based Fürst family around 1890 and was named after the country’s famous composer, Wolfgang Amadeus Mozart. Do not let the marzipan portion turn you off: one of our neighbors dislikes marzipan, but she loved the Kugeln! The Fürsts unfortunately (or fortunately for consumers) did not patent the invention, and several, commercial producers, like Austria’s Mirabell and Germany’s Reber, made variations off the original recipe. Confusingly, both companies call their versions the “real” Mozartkugeln, but only the Fürsts are allowed to name theirs the “Original” Salzburg Mozartkugeln. Interestingly, between Mirabell, Reber, and Manner, only the first one can be round, Wikipedia added.

There are different ways to enjoy the Mozartkugeln. Many just plop the whole ball into their mouth and let the layers melt away, whereas others (myself included from time to time) like to eat the outer layers until the center, pistachio marzipan remains. There really is no wrong way to eat them! For example, I eat McDonald’s Big Mac as two, separate burgers (where the bottom half is eaten last) when most likely dig into the whole sandwich with each bite.

I have never had the Fürst’s “Original Salzburg Mozartkugeln” because I was too young to drive or travel on my own at the time. I would like to try them someday when visiting Salzburg.

Mozartkugeln were invented by Salzburg’s Fürst family in the 1890s and have enjoyed a big following throughout Europe.

Between the Mirabell, Reber, and Manner, which one tastes better? It depends.

This company’s version is made of pistachio, almonds, and roasted hazelnuts, consisting of a small, marzipan center, surrounded by layers of light and dark praline cream, and coated with dark chocolate. 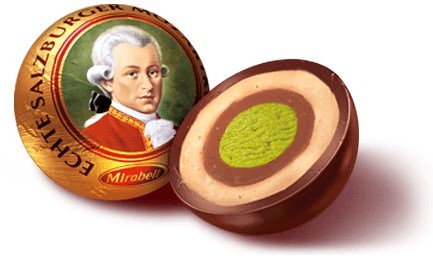 It has a richer, smoother taste with a better flavor and texture balance than Reber’s due to its smaller marzipan center. Hazelnuts make a more noticeable presence and are reminiscent of the beloved Nutella. Nutritionally, the Kugeln are identical with Mirabell’s coming at 94 Calories (kcal) at 0.6 oz each and Reber’s 101 Calories at 0.7 oz.

The rich flavor can often make you feel a bit bad after having eaten a few too many, and so enjoy them in moderation. But by golly, they are SO GOOD!

Mirabell products have been much more difficult to find in the United States and thus make for a more special gift than Reber’s.

A variation of the Mozartkugeln are Mirabell’s Mozarttaler (Mozart Coins), though they have a different taste than the balls. 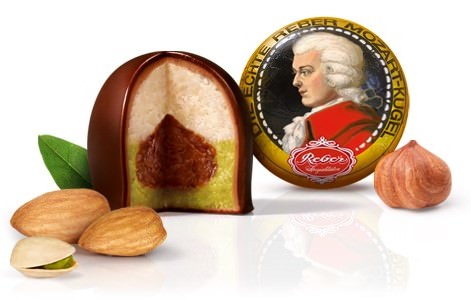 The German version of the Mozart balls are made of similar raw materials as Mirabell’s, though they taste very different. Reber’s have been easier to find in California brick and mortar stores and have a nuttier taste with a hint of alcohol flavor (even though it is not among the list of ingredients). This Mozartkugel variety makes a larger marzipan core take center stage with its stronger almond flavor profile. Since it tastes and feels less rich than Mirabell’s, I have found them easier to digest more of but keep in mind that the caloric values of both brands are identical.

As a former citizen of Austria, I do prefer Mirabell (with perhaps a slight bias) to be more “authentic” to the original as both Wolfgang Amadeus Mozart and the Mozartkugeln inventor are Salzburgers. Reber is a German brand.

Another Austrian variation of the Mozart balls is made by confectioner, Victor Schmidt, under the Manner brand who is perhaps best-known for its Neapolitan Wafers. The wafers were certainly some of my childhood, all-time favorites, but little did I know until late 2020 that they also make the Mozartkugeln. Intrigued, I set out to have some imported to see how it tastes and am so glad I did! 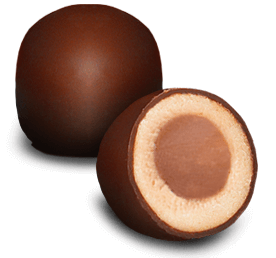 Similar to Reber’s version that tastes and feels less chocolatey rich than Mirabell’s, it has a stronger focus on the pistachio-flavor marzipan — but without the alcoholic hint of the German competitor’s. I instantly felt a familiarity with the dominant flavor and pinpointed it to that of Pistachio Gelato, another favorite dessert (ice cream, in fact) of mine.

At the center of Victor Schmidt’s variety is a light nougat surrounded by a generous layer of marzipan and covered with dark chocolate.

Mirabell’s is the only kugel that can be round, and so Manner’s has a flat bottom just like Reber’s.

My very generous cousin in Vienna, Austria, sent our family a large batch of Austrian chocolates after reading the original publication of this article. Included were the Mirabell Mozarttaler (Mozart Coins). I remembered that the Mozarttaler was never particularly a favorite of mine as compared to the Mozartkugeln, and after having one again recently, my opinion did not change. There was something odd about it. I asked my cousin to describe why they were his favorite among the Mozart-themed chocolates. My wife liked the Taler too. 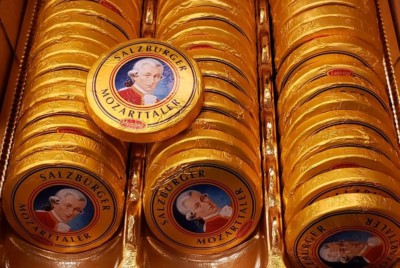 In his opinion, the Mozarttaler are delectable for the following reasons:

For “research” purposes, I literally took out a single Mirabell Mozarttaler from the stash right after writing this portion of the article. Bite after bite, I trained my mind to focus each tasting on the chocolate and creamier marzipan. I could now see why my cousin liked them, but in the end, they still did not outrank the Mozartkugeln. Sorry, cousin! More Taler left for my wife and dad to enjoy! 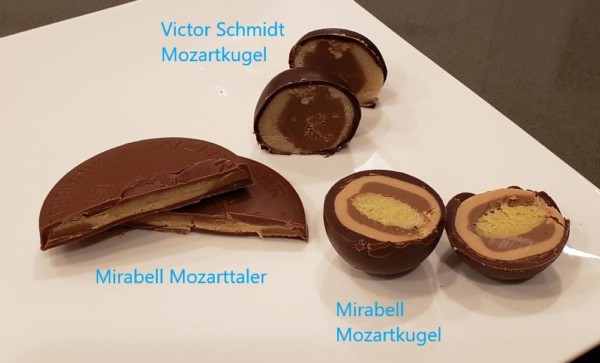 When and Where Should You Buy?

I have found that ordering the Mozart kugeln during the colder months of the year is best as delivering chocolates overseas during the summer heat, for example, could end with a melted mess. There were some sellers who had them shipped via Amazon’s warehouses and arrived as early as the next day.

In no way as an endorsement, my purchases had been through the below Amazon sellers. Prices paid included international shipping or were sent from Amazon/US warehouses if “US ship” is mentioned: 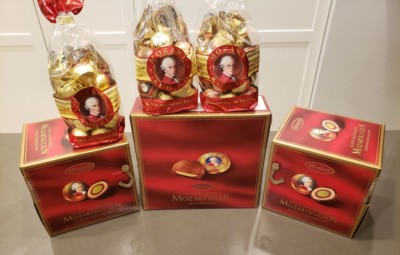 Tip from my Austrian cousin: If you plan on purchasing a lot of Austrian goodies, you may consider skipping Amazon and buy directly from online shops, like Monarchy Catering and Austrian Supermarket, for better overall pricing.

My father’s side of the family still lives in Vienna, and there had been multiple times I had considered asking them to have a mix of Mozartkugeln and other Austrian favorites mailed to us. Ultimately, I decided against it because of the inconvenience it would have placed on them, and the unanswered question of how best to reimburse them for their expense in a convenient-for-them way, even if they refused to accept payment. The Amazon Marketplace, Monarchy Catering, Austrian Supermarket, or other online shops remain the preferred shopping venues for now. 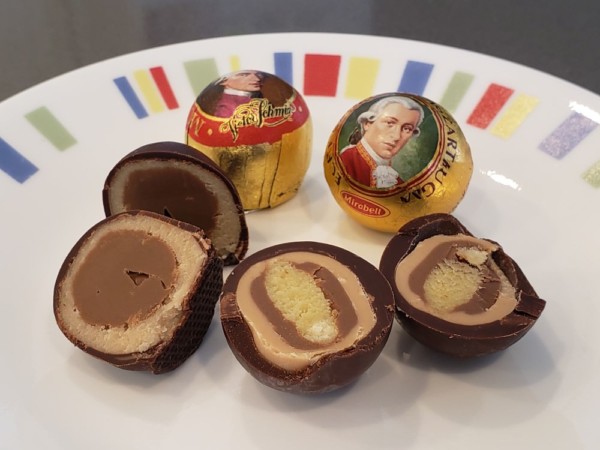 My family, friends, coworkers, and neighbors — nearly all of them — love the Mirabell Mozartkugeln! The rich, sweet, milky chocolate taste that literally melts in your mouth until the center marzipan is revealed as a kick to the taste buds brings a bit of luxury and indulgence to an otherwise boring day. The Reber Mozartkugeln are a great way to enjoy a stronger, nuttier, lighter flavor and are, in fact, my dad’s favorite between the two. New to the list are the Victor Schmidt (Manner) Mozartkugeln that remind me of Pistachio Gelato and are similar to Reber’s but without the hint of alcohol. Sometimes, I would order two, different products for a bit of variety. 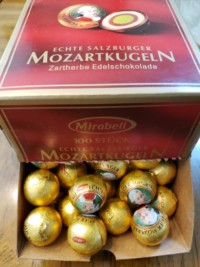 I miss Vienna. I truly do. It is a beautiful city with very welcoming, relaxed people, and although my childhood was filled with some moments of racism towards my pre-teenage years by fellow school mates, the memories have been overwhelmingly fond and beautiful. Strolling through Vienna on foot from one end of the city to the other while enjoying sweets along the way during Christmas, Fasching (Carnival), and the mild summer days provided plenty of sights to see with remarkably fresh air. The Prater amusement park and Stephansdom (St. Stephen’s Cathedral) / Stephansplatz square were some of my favorite places to enjoy the Faschingskrapfen, Palatschinken, and — now in my adulthood who can afford his own purchases — the decadent Sacher and Imperial Torten of their namesake hotels.

The Mozartkugeln are a way for me to remember the many, many good memories of my family’s time in Vienna, and I hope that they will eventually catch on in popularity in the United States like Nutella, a staple in Austrian school breakfast, finally did after the early 2000s.