Skip to content
Home\Photography\How It Was Shot: A Moonlit Yosemite

How It Was Shot: A Moonlit Yosemite

My best friend and I wanted to do a 4-day backpacking trip through Yosemite via Tuolumne Meadows. We would like to have at least one a year whenever our busy lives would permit. California has been in a severe drought, and we went into the trip in early July with the expectation that it would be dry throughout the route, hot during the day, cold during the night, and annoying with mosquitoes everywhere.

The first two days were living mosquito HELL — we had never seen so many swarm around us before and had to constantly re-apply repellents! Not until we reached Evelyn Lake did we finally receive temporary relief — a brief moment we greatly ENJOYED before we were forced to retreat into our tent by a country of thirsty mosquitoes. It was very hot inside, even without a rain cover, but it was like heaven.

As evening approached, potential for rainfall neared, and temperatures started dropping, we gleefully observed the moon rising above the horizon, washing out the stars in the sky. 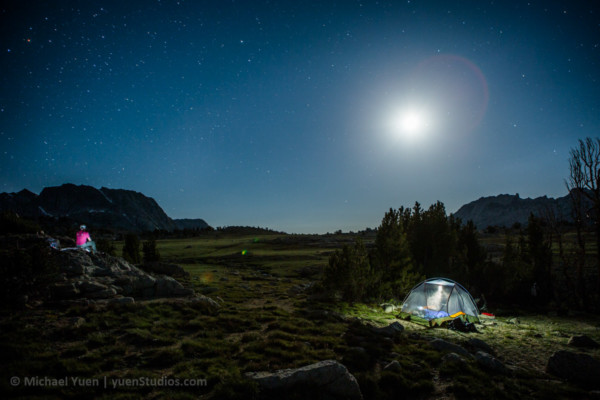 Inspired by an REI photo, I had always wanted to take a picture of a lit tent in a scenic surrounding. I decided to take my first, serious attempt at capturing such an image. Here is how the featured image was shot and processed. 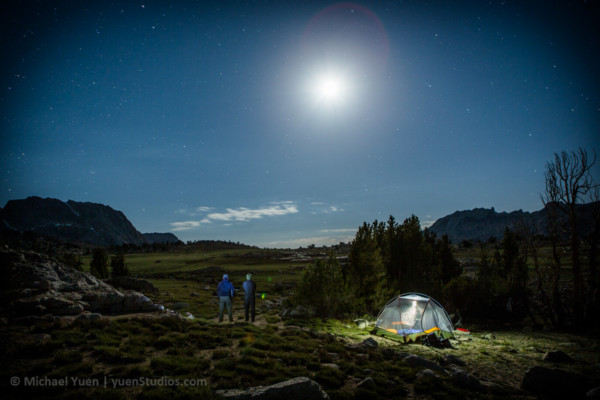 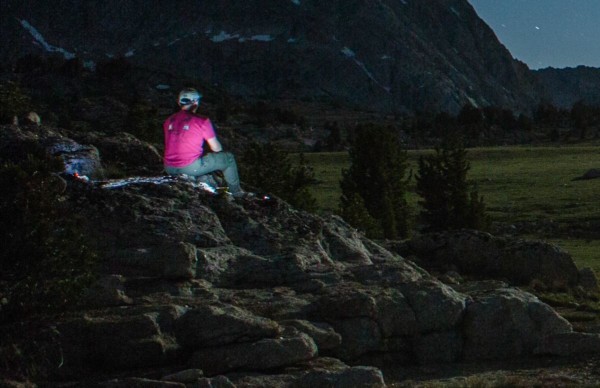 How I lit myself on this rocky area

The first thing I wanted to do was lighten up the overall scene, lower the moon’s exposure, and finally reveal as many stars as possible. I also did not enjoy how warm the original image was.

Despite having been eaten alive by mosquitoes and having our spirit broken (we cut our 4-day trip down to three — we HAD to get out of there), we were in absolute awe of the beautiful route we took. We were also dismayed by the California drought — many streams were bone dry, making the trek through the high elevation a battle of will power.

The photo has also become one of my favorites, and I am very pleased with my first, serious attempt at landscape night photography during a backpacking trip. The beauty of the site we camped at still rings vivid in my memories.