Mammoth Cave was a fun adventure for our group of 11 adults! It was equally fun for the children we met there, although adult supervision should be required — I will explain later. It was apparently formed about 2,000 years ago by volcanic lava flow, and when we arrived, we explored 3 of the 4 caves. All four can be reached from the big opening at the center of the parking lot — flashlights are absolutely required. Climb down, and you will be presented with several caves to explore.

The cave entrance can be found at GPS Coordinates:

It can be reached from Highway 14 onto Mammoth Rd. From there, a “Mammoth Cave” sign directs you to turn right into the unpaved road. Note that regular automobiles (non-SUV/trucks) could get stuck in the mud during the rainy season.

A smaller cave can be found when climbing down the smaller opening. I did not go there, but my friends said that it was a short, dead-end. 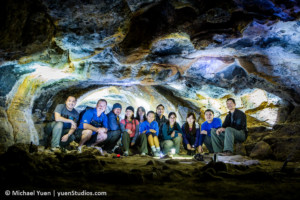 Climbing through the larger opening, turn left into an opening that requires one to crouch. The ceiling was low, and at only a few spots could one stand. As we hiked through that cave, we encountered a cluster of bats — it was quite an interesting, yet scary sight. A moment further into the cave, we took a group picture before proceeding to the end of the cave. Little did I know that this photo would become one of my favorites from the trip — the colors inside the cave were amazing! Mind you, during the entire time, flashlights were needed — it was pitch-black darkness otherwise. The end of the cave (southwest of the cave entrance) was partially lit by sunlight, and the only way to cross through to the opening was to literally crawl on your stomach, navigating the rocks along the way. This section could absolutely instill claustrophobia — the fear of being in a confined place. Note that this cave was a bit on the warmer side: I took off my jacket.

Climbing through the larger opening, turn right, and you will immediately see a big cave opening that’s gated with metal bars. At the bottom, you will find a doggie opening to crawl through. From what I understand, the gate is to minimize human traffic in order to not disturb the bats. We did not come across any in this cave. I also read that this gate gets closed sometime in October — again, to protect the native wildlife and the bats.

The cave was very large, and I was immediately amazed by its size — was lava flowing THAT high into the ceiling 2,000 years ago? This cave was on the cooler side of the temperature spectrum. We loved the fact that it felt like walking through a refrigerator in this hot, summer season. As we continued pressing further into the cave, we found droplets of blood on the ground. Right away we looked up to see if any bats were around, but there were none. All we found were droplets of water all over the ceiling. We found more blood as we continued deeper in, and we finally found its source: someone must have banged her head against the ceiling — hair was still hanging from a stalactite, followed by blood below. Ten seconds later, one of us in the group also banged her head against the ceiling, and her head, too, started to bleed. I immediately instructed everyone to keep one of their hands in front and above their head at all times to prevent further injuries.

Further into the cave, there was a tight opening to the left. A local kid told us that he has visited the cave every year, and that the opening would have been the exit. However, this time, it was blocked by rock fall. We decided not to proceed. A young teenager, however, did tell us that he went through that opening. I surmise that the opening is to the northeast of the start.

When we returned to the start of the cave, we were greeted by rain that was starting to pick up. On the way back to the highway, we saw Utah Highway Patrol and a van drive towards the cave. They probably were going there to ask all visitors to leave the area. It was apparent to me that flash flooding was a concern for those still inside the caves.

We did not explore the 4th cave as it did not appear to lead far.

Head into the cave with:

For children, be sure to supervise them. Watch your head also — the rocks are extremely sharp and can cause serious injury. The Mammoth Cave was quite an adventure for our entire group! You may also want to consider visiting nearby Cascade Falls.