I could not find much information online, but here’s to educate you all of this common condition from a backpacker’s perspective. Note that I am not a medical professional. Consult your physician/Dermatologist for more info.

After backpacking Yosemite in early July, I came home to some red, bumpy dots on the sides of my left foot. My heels were both dry, but that’s normal with wearing sandals a lot. A week later, the skin started cracking like a sunburn, and like one, I peeled back the skin thinking that new ones will show through eventually. It was not itchy — just dry.

Two months passed, and it didn’t get better. Hiking became painful when the foot was exposed to water, and it kept rubbing against my sandals. I got a “textbook example” of Athlete’s Foot, the doctor said. I may have gotten it from a public RV-park shower after the trip.

“Without the proper environment (warmth and moisture), the fungus may not easily infect the skin. Up to 70% of the population may develop athlete’s foot at some time. An infection by athlete’s foot fungi does not confer any resistance to subsequent infections.” *

The images below were photographed on September 3, 2014: 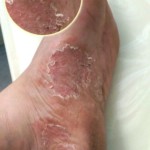 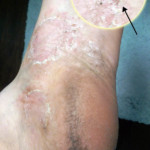 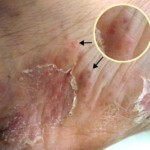 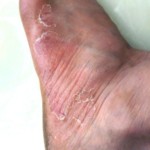 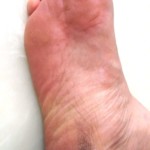 Right foot doesn’t appear to be infected, but just in case, medication will be applied on the big toe and heel as well

Can you still hike while having Athlete’s Foot?

No information has yet been found on that topic, but most likely not. The fungus thrives on moisture and warmth, helping it spread further. However, I have done a difficult, all-day hike 3 weeks after infection, and I made sure to change my wool socks 4 times that day.

What Worked For Me 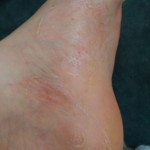 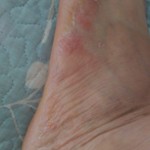 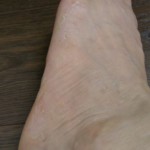 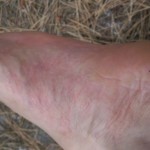 A Facebook friend (see more info from him below) shared the following Foot Soak recipe that helped him recover his feet within a week. This solution reportedly also treats any fungus lodged between the toe nails:

A friend provided the below information after having been dealing with the issue since at least 2013. His infection went all the way into his intestines via the crotch after using the towel of another infected person.

His Research Notes (Edited for Readability)