This story was featured as the First Place winner in the Latin America For Less Travel Contest (April 15, 2013).

She said, “Yes!” the morning of December 27, 2011 at Machu Picchu, one of the Seven Wonders of the World, just minutes after the seemingly endless rain stopped pouring. I had just proposed to my girlfriend of two years, and she had no idea it was coming. Here is our story about Peru, and the day she became my fiancé.

Stephanie and I wanted to take an international vacation together, and set out to contact Kristina Rudge of Peru For Less for some ideas about Machu Picchu. “Perfect”, I thought, “this is where I will propose to her!” Kristina was instrumental in customizing a detailed itinerary for the types of activities we were interested in and answered every question we had about Machu Picchu, its 4-day Inka Trail trek option, and an Amazon Rainforest experience at the Inka Terra.

We knew that the Inka Trail trek to Machu Picchu would be difficult for Stephanie, but I also knew how strong she could be. She just needed to see that for herself, and the journey would be a perfect opportunity for such. Elevation sickness, cold temperatures, frequent rain, and exhausting hikes would add to a much more “memorable experience”, I thought, making a surprise proposal at the end the more special. And so with the trip planning, I set out to look for the perfect engagement ring to surprise her with. 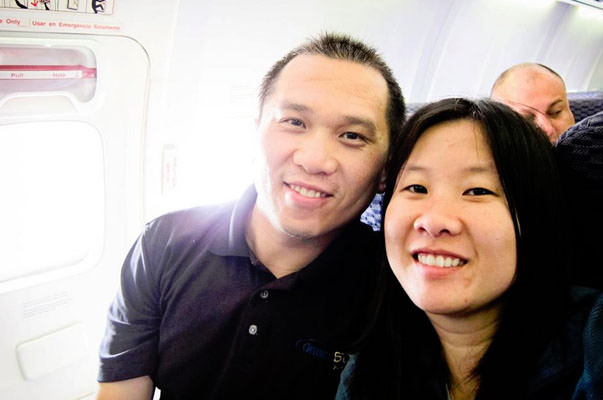 When Stephanie and I arrived in Lima on December 19, 2011, we were greeted by a friendly Peru For Less representative who took us, via a taxi, to our hotel while going over the details for that section of our trip. The drive was quite an eye opener: cars were weaving in and out of the busy streets, and pedestrians seemingly were too afraid to cross. There were many instances where I wondered how the taxi driver could have possibly squeezed through certain areas without hitting other motorists. Yet, he somehow managed through all the chaos. “Who has the right of way here?” I asked. “The pedestrians do.” Yet, none of the cars stopped for them. The representative continued to answer our curious questions about local cultures and customs.

The hotel was quite pleasant and within walking distance to the town center we could explore. We walked from one end to the other, noting the vast amount of shops, tourists, and locals, occasionally stopping to take a closer look at items on display.

The following day, we were once again picked up by a representative, and were placed onto a bus for an all-day tour with other tourists. This day was to focus on the culture and sights throughout the city of Lima with plenty of opportunities to take documentary pictures. We quickly learned and appreciated how passionate, knowledgeable, and proud the English-speaking guide was for the city and its heritage. The tour did not feel rushed, and we ended the day with satisfied smiles.

For the next part of the vacation, we headed to Cusco, a town that was much calmer than the chaos we found in Lima. The people were more relaxed, streets were narrow with fewer cars, and many locals were dressed in their traditional outfits. We knew that Cusco would become a darling town for us to stay in where the shops, people, and places would be much more intimate and personal.

As soon as we arrived at our hotel, the Casa San Blas, our guide advised us to drink lots of Coca tea to fight the elevation sickness we would soon encounter. It was necessary for us to spend a few days in Cusco to get acclimated to the high elevation prior to our 4-day trek to Machu Picchu. The hot tea tasted strange at first but was also somewhat calming. We also met two other American girls who were going to be part of the same Machu Picchu trip as ours.

We once again booked tours for the next two days to explore Cusco, and on one of them, we would meet our third American who would be joining us for the Machu Picchu hike. He was quite an interesting character: a young man who was traveling the world for months at a time, finding work wherever he was so that he could stay there a bit longer.

We visited ruins, shops, and restaurants, and along the way we had pleasant conversations with other travelers who came from all over the world, including Europe, Australia, and America. We also experienced a live, entertaining demonstration in Chinchero of how textiles were made using traditional methods. As we were sadly told, it unfortunately was a dying art. 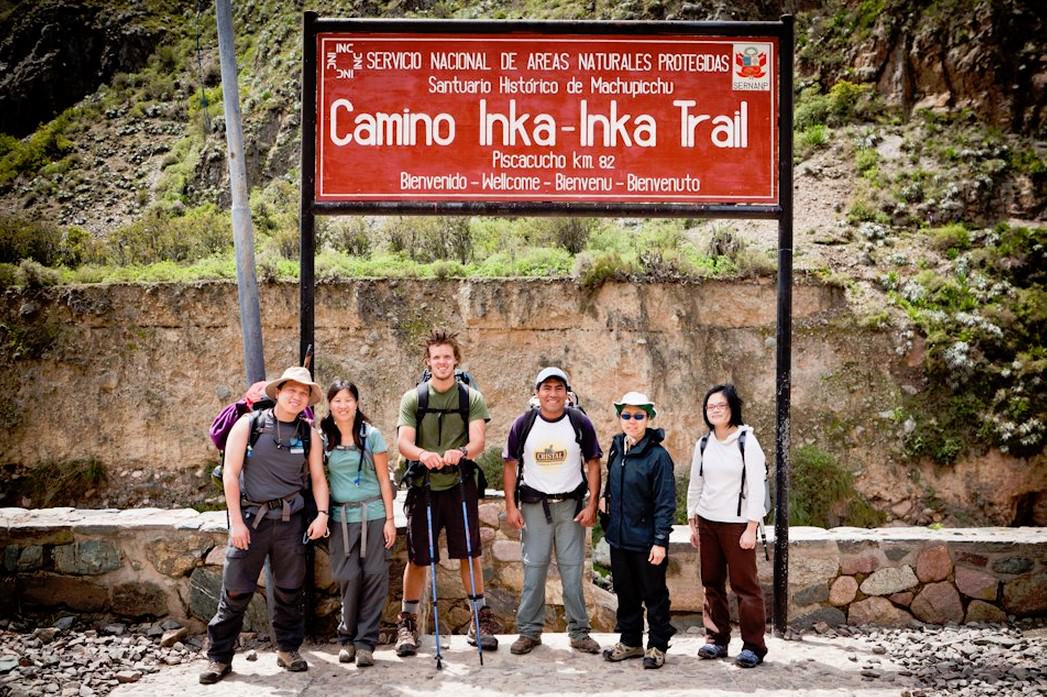 The four-day, Inka Trail hike to Machu Picchu was about to start! Led by our trek guide, Edwin Cusi, we started our unforgettable journey to one of the magnificent Wonders of the World with the three other Americans we previously met. Little did we know, but the experience and challenges we were yet to face would soon bond us as friends.

I am an avid wilderness backpacker and was looking forward to the challenge and the sights we would see. We were all both eager and slightly worried about the unexpected. Will we be able to reach our goal? Will the hike be too difficult? Will elevation sickness make us turn around?

The hike started steeply on a beautiful, warm day. There were quite a lot of teams of trekkers, supported by strong, friendly porters. Without a doubt, these individuals who carried all the necessary gear (kitchen, tents, furniture, gourmet food), were instrumental in having our hike be enjoyable, especially while many of us were still getting used to the lack of oxygen found at the higher elevation.

The wonderful Porters of our Inka Trail trekking group

We huffed and puffed through the steep terrain, taking in the beautiful sights of the land, ruins, and their history. When we approached the camp site where our first lunch would be served, it started raining. Alas, we were greeted by tents the porters had already set up, and a warm, delicious, multi-course meal was already being prepared by the young chef and his assistant. How were they able to prepare such meals so far from civilization? Soup, seafood appetizer, chicken, dessert, vegetable, Lomo Saltado – unbelievable!

Our first night, thousands of miles away from our friends and families, was Christmas Eve. We thought about how our loved ones were doing at home, and we saw that our guide, porters, and chefs, too, were missing theirs. There was no tree for us to decorate, but that did not stop us from improvising a small celebration for the holiday. One of our fellow hikers’ hair was so spiky and curly, we found that we could hang some impromptu Christmas ornaments off of him! Little, silly things like this uplifted our spirits throughout the journey, and helped all of us felt more at ease with one another.

When we reached the highest point of our trip, the [Warmiwanusca] Dead Woman’s Pass (14,000 ft or 4,270m), we took some celebratory photos. Edwin and I would stay behind a bit longer to take some jump shots, and after many, many takes, we finally found one we were happy with. The exertion on top of the Pass took a toll on me, however, and the elevation sickness pounded my head with pulsating headaches. The only way to relieve was to head to our next camp at a much lower elevation.

The next [day was] filled with more strenuous hikes, and our guide did a great job explaining to us the various histories behind each sight and ruin we would come across. I also took it upon myself to get to know the porters better – at least their names – so that I could send them some pictures once the trip was over. It was also during this time when I revealed to our guide my proposal plans, and asked him for his help in finding a good spot at Machu Picchu to get on my knee. Our fellow trekkers were asked to swear secrecy.

The final day of the trek finally dawned upon us with a very early morning start. As they had done each morning, the porters prepared us some hot Coca tea and warm containers of water to wash up with. We were already exhausted by then, beaten by the cold and constant rain throughout the evening, yet were filled with excitement. We had also said our sad good-byes to the crew the prior evening, and expressed our sincere appreciation for everything they did for us. It was now just the five of us and our guide.

“We are almost there”, I assured Stephanie, while we were pushing ourselves up many steep steps to reach the Sun Gate in the light rain. I saw her exhaustion, but also felt her anticipation of what was yet to come. We were just minutes away from seeing Machu Picchu!

And there we were at the Sun Gate, a gorgeous place overlooking a river that eventually merges into the Amazon, Machu Picchu just peeking through the clouds in the distance. The sun was rising right from behind us. It was a sight that just struck us with awe! 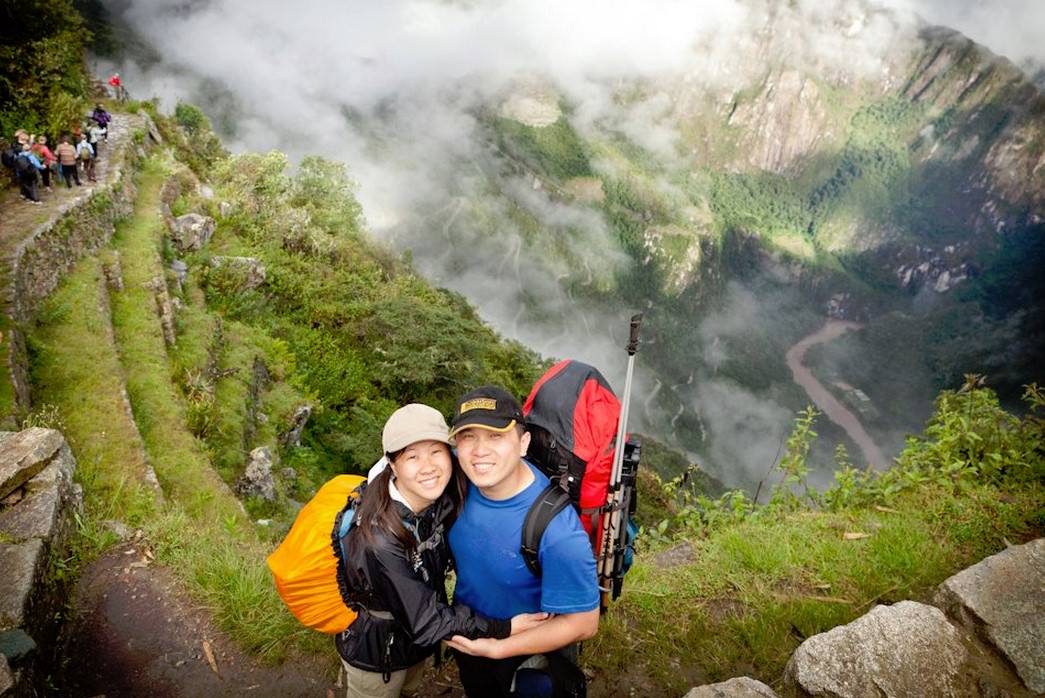 View of Machu Picchu from the Sun Gate

I asked our guide, Edwin, to take some pictures of Stephanie and I, and in the process took the opportunity to teach him how to use my camera and how to compose the shots for the “big moment.” We also attempted to use our smartphones – with what little signal that was available along the way – to post on Facebook that I was about to propose. Alas, the cellular reception was too weak. I was starting to get a bit nervous as we finally reached Machu Picchu. 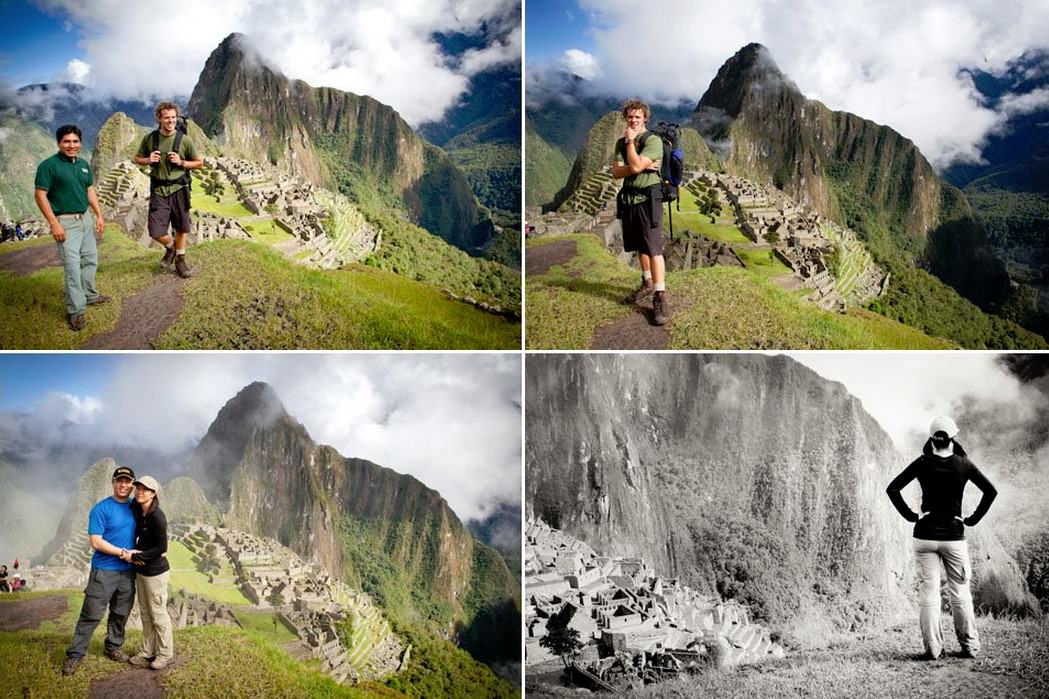 Test photos at Machu Picchu before the surprise moment

Edwin picked a spot, and it looked perfect. I asked Stephanie to take some test photos with me while I showed Edwin how I would like them taken. And then it happened… 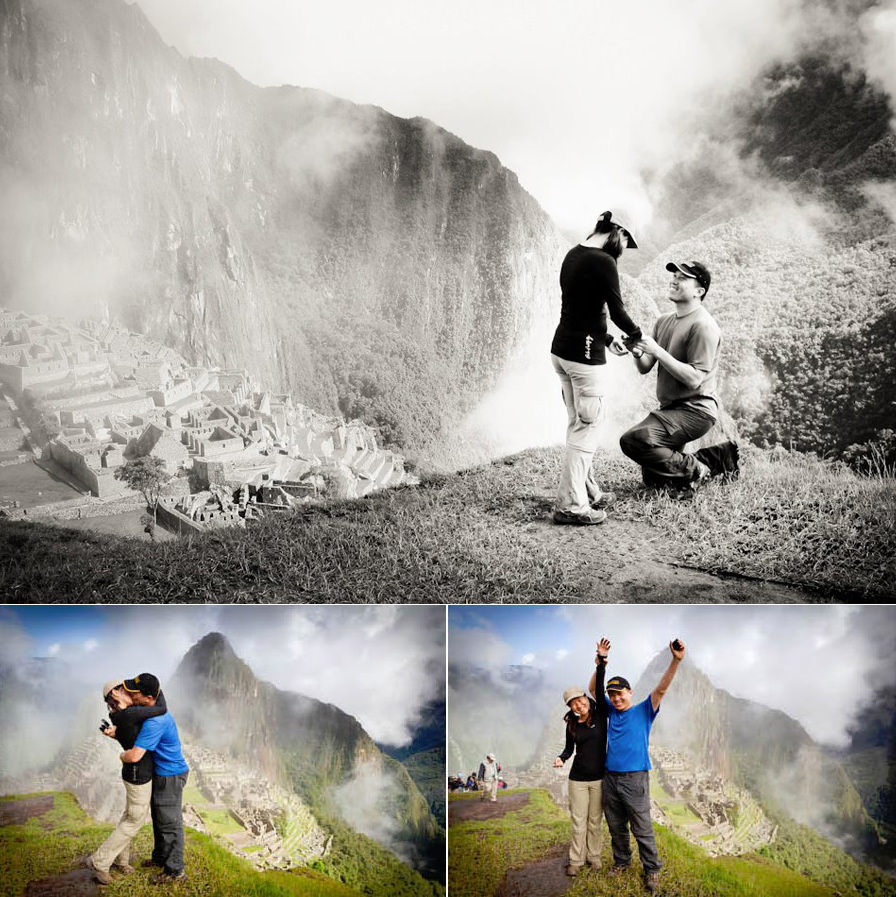 The Proposal at Machu Picchu

I went on my knee, holding both of her hands and looking into her eyes, and told Stephanie how proud I was of her. “I have a gift for you that should last you a whole lifetime,” I said, as I was pulling the ring out of my pocket. At that moment I was so nervous, I forgot everything else I wanted to say, and just asked, “Will you marry me?” Stephanie’s lips were shaking, but I saw in her eyes how happy she was. She said, “Yes!”

Delighted as we were, we took many more pictures with our group of trekkers. Edwin, our guide, noted that he was so excited during the proposal his hands were trembling with camera in hand. I thought that was quite funny!

We completed the tour with our group of new friends, learning about the history, the ideas, and philosophies of the people of Machu Picchu. The 4-day trek made us appreciate this magnificent place even more, and we were glad we did not take the easier route via the train. 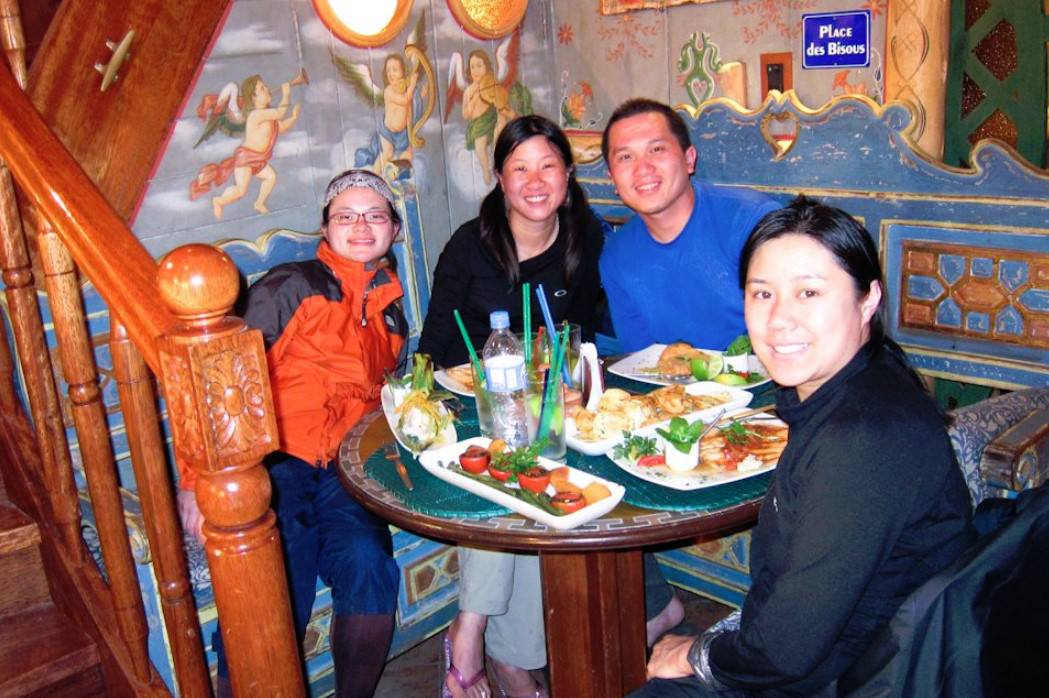 Truly, Stephanie and I very much appreciated the adventure we experienced, and finished our vacation – our newly-engaged life – with a relaxing, adventurous stay at the Inka Terra Amazon resort. Peru was one of the best trips we had ever taken, and we made several friends along the way! We would like to go again someday.