What was originally planned to be an easy, two-day backpacking trip for the remainder of 2012 to Pear Lake in Sequoia National Park became one of the most challenging trips we had ever undertaken.

Days before we were set to go to Sequoia, we realized that temperatures dipped to 20F in the evenings, and we had to decide on an alternate trip. We decided to try going to the Sespe Hot Springs via Johnston Ridge Trail in Los Padres National Park, and a quick look of the elevation profile was deemed as somewhat difficult, but doable. We had no other alternative hikes available at such short notice.

In the group were 5 experienced backpackers, and 3 new to the activity. Little did we know that this trip would challenge each one of us to our limits. I was in my second week of having Bell’s Palsy, as shown in the below picture: 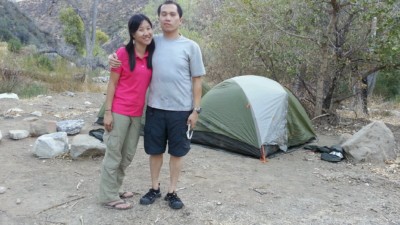 Sespe Hot Spring is a 9.5-mile hike through dry, hot wilderness where the last 4.5 miles drop 2,000 feet in elevation:

We arrived to a welcoming 103F stream, and dipped our aching bodies for some relaxation while the girls worked together to set up their first tent without any instructions. They did well!

I attempted to make Pizza using Dam Nguyen’s wood stove, but the experiment unfortunately did not fare so well: the wood stove’s heat could not be controlled, burning the bottom of the pizza. I decided not to make any more in the future due to the mess and cleanup work required. The recipe and idea was obtained from Backpacker Magazine. 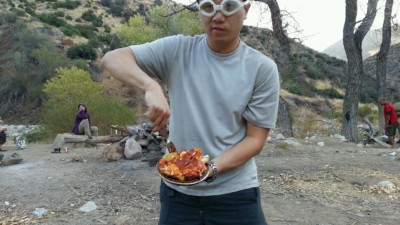 On the second day, we prepared for the most challenging part of the trip yet by waking up at 6am in the morning to beat the coming heat. We knew that the first 4.5 miles would be killer. Indeed, it was. I nearly collapsed due to exhaustion with a 70lb backpack and, as I realized later, lack of food. Not until I had a few snacks and took off the leggings from my pants did I realize that heat was a bigger factor than I thought. I looked at my hiking mates and was very proud of everyone in the group for exhibiting mental and physical toughness during their own struggles. The girls in the lead group congratulated themselves for being ahead of the experienced ones.

We reached our cars exhausted, tired, hungry, sore, and dehydrated at 4pm — several others at 5pm. We nearly ran out of water, but were looking forward to having some ice-cold soda and big, juicy, guilt-free burgers. After all, we had just burned over 8,000 calories over the course of two days!

All in all, despite the soreness and exhaustion, we all were glad we took and made this trip. Thanks for the memories, and congratulations to the newly-experienced backpackers! 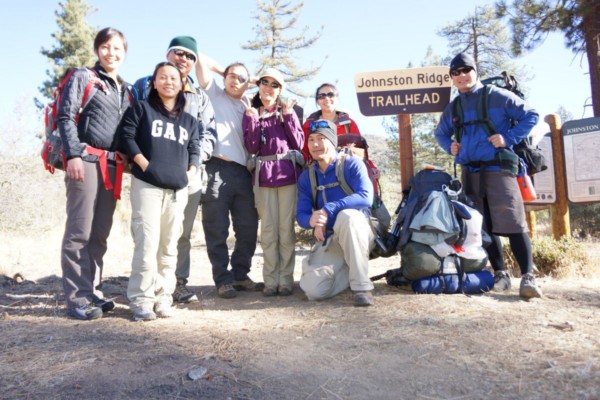